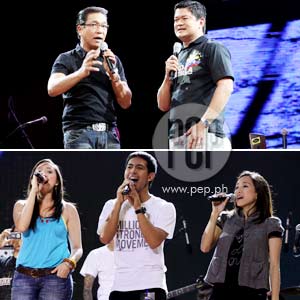 Some of the country's top bands along with ABS-CBN anchors gathered last Friday, February 19, at the UST parade and athletic grounds in Manila to encourage the youth to vote wisely.

ABS-CBN has been very active since last year in encouraging the youth to exercise the right to vote not just by going to the precincts, but by choosing wisely for the good of our country. Many believe that the new generation of voters will play a crucial role in this year's upcoming national elections. Majority of the voting demographics will come from the youth sector.

Part of the Kapamilya network's objective in organizing election-related campaigns is to educate the voters on how to assess the candidates based on track record and platforms for governance.

The May elections will also witness the first automated poll in the Philippines, which traditionally has tallied votes by hand. While automation is a giant step in upholding our hard-earned democracy, many are skeptical, fearing that computerization could easily favor those who want to manipulate the results.

ABS-CBN's campaign aims to educate the public on how to adapt to this technological change and to promote vigilance against possible fraud come election time.

ROCK TO VOTE. ABS-CBN tapped some of the country's top bands and performers to play music and raise awareness by directly communicating its message to the youth.

During the concert, ABS-CBN launched its Boto Mo, iPatrol Mo microsite, a website designed for Filipinos to file their reports and concerns.

Citizen journalism has figured significantly over the past years with people using their mobile phones and the Internet to report anomalies and even crimes.

"Some of the most compelling stories aired on television actually came from boto patrollers, like the burning of a poll precinct in Batangas which claimed the lives of two teachers, and the first photo of the Maguindanao massacre to be aired on public which was taken only minutes after the gruesome crime occurred," ABS-CBN said in a statement.