TV5 on Dolphy deal: "We don't mind working on a non-exclusive basis." 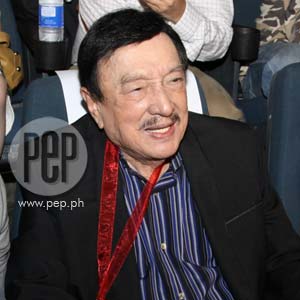 Comedy King Dolphy's non-exclusive deal with TV5 allows him to work with other networks and production teams.

The seed of TV5's partnership with Dolphy was planted late last year when the Comedy King was busy promoting his Metro Manila Film Festival entry, Nobody, Nobody But Juan.

"We got excited then, but we knew we needed a very strong concept to present to him. There were a number of ideas but we didn't want to rush it until everything was right," Intalan, who heads TV5's creative and entertainment department, wrote.

Ideas, suggestions, and concepts were generated by the network's staff to come up with a project good enough to convince Dolphy to sign up with the Novaliches-based station. It took one valuable contribution from another ace comedian, who is being touted as Dolphy's successor to the throne of comedy kingship, to finally seal the deal.

"In one of our meetings with Vic [Sotto], he brought up Dolphy and we bounced some ideas around for a while. Vic actually helped us fine tune the concept that we eventually felt was the right one. And fortunately, when we presented it to Tito Dolphy, he liked it immediately! And with that, everything fell into place."

Dolphy and Vic Sotto worked together in the 2008 comedy film Dobol Trobol. Vic is also the host of TV5's local franchise of the game show Who Wants To Be A Millionaire?.

FREE TO MOVE AROUND. Much has been reported regarding the supposed secret deal, which shook the foundation of Dolphy's longstanding working relationship with ABS-CBN, the Comedy King's home network for many years before his jump to TV5.

Intalan dismissed the notion, however, that the deal could have possibly driven a wedge between the legendary actor and the Lopez-owned network. There's also a reason why the terms of agreement entered into by both parties were less stringent.

"We didn't want Tito Dolphy to feel he has to sever ties with ABS-CBN just because he has a show with us. So we told him we don't mind working on a non-exclusive basis. After all, stars of his stature should already have the freedom to move around our small industry," explained Intalan.

"I think he appreciated that because with that issue out of the way, the rest of our meetings became light and enjoyable. In fact, during our contract signing, after the cameras were gone and the documents were signed, he stayed behind for over an hour just chatting with us and sharing stories."

Details about the project are yet to be made public. Initial reports had it that the project is being earmarked for an April premiere. What's certain, however, is that with Dolphy joining the Manny Pangilinan-led station, the company is pretty much poised to deliver on its promise to strengthen its programming without replicating what the others are offering.

Perci Intalan enthused, "We're very excited to work with the King of Philippine Comedy. While the other networks are going heavy on their dramas, TV5 has been delivering viewers the fun and lighter side of TV, and I guess that's why more and more people are watching us now. With someone as big as Dolphy joining us, you can really say that TV5 is taking comedy very seriously!"