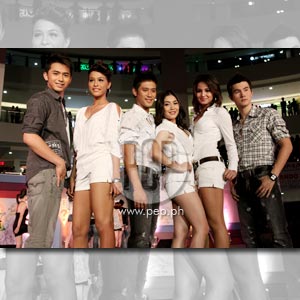 The remaining six aspirants of GMA-7's interactive reality-based artista search, StarStruck V, successfully strutted on the catwalk like professionals before an audience composed of fans and casual spectators.

Most of the StartStruck V contenders had no extensive modeling experience to boast prior to last night's event and the group was only given an entire morning to practice and prepare for the event. The fashion show also served as an additional challenge to the remaining contenders as the show enters its final stretch leading to the final judgment on February 21.

"Kinabahan po talaga ako kasi hindi po ako nagmu-model," half-Japanese, half-Filipino Nina Kodaka told PEP (Philippine Entertainment Portal) after the event. Nina's only modeling stint happened seven years ago without much at stake other than the experience. Now, Nina is competing for the right to be named this year's Ultimate Female Survivor.

Towering beauty Diva Montelaba, on the other hand, felt that her past modeling experience helped her tremendously in dealing with nerves and stage jitters.

Rocco and Enzo noticeably earned much of the screams and cheers from the predominantly female crowd. Among the ladies, Sarah emerged as perhaps the most favored, based on crowd's reaction last night.

This year's Avengers, or those who were previously eliminated from the race, also showed up. A shirtless Ian Batherson led his fellow ex-aspirants: Rox Montealegre, Princess Snell, Sef Cadayona, Zeryl Lim, Rye Burgos and Fianca Cruz.