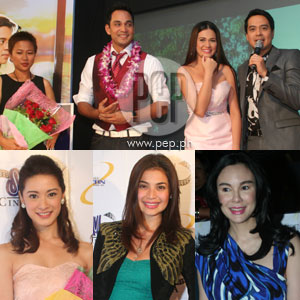 (Top frame, from left) Director Cathy Garcia-Molina, Malaysian actor Hans Isaac, Bea Alonzo and John Lloyd Cruz were overwhelmed by the throngs of fans that attended the premiere night of Miss You Like Crazy. (Bottom frame, from left) Maricar Reyes, Anne Curtis and Gretchen Barretto graced the event as well. In the movie, Hans plays the love interest of Bea; Maricar plays the girlfriend of John Lloyd.

After a three-year hiatus, the John Lloyd Cruz-Bea Alonzo tandem once again worked its magic on the silver screen for Star Cinema's latest offering, Miss You Like Crazy.

Last February 23, the cast members graced the two premiere screenings held at Trinoma, in the afternoon, and SM Megamall, later in the evening. Throngs of frenzied fans as well as celebrities gave their support to the beloved tandem that was last seen in the 2007 movie One More Chance.

THE CAST. Before the movie started, balladeer Erik Santos sang the theme song of Miss You Like Crazy.

After his rendition, the entire cast of Miss You Like Crazy was ushered to the stage. Led by box-office director Cathy Garcia-Molina, the stars of the film—Bea Alonzo, John Lloyd Cruz, Maricar Reyes, Malaysian actor Hans Gerald Isaac, Bembol Roco, Ryan Eigenmann, Ketchup Eusebio, Sylvia Sanchez, Tirso Cruz III, Jane Oineza and Malou Crisologo— entered the venue, much to the delight of the waiting fans.

After the movie, ABS-CBN President Charo Santos-Concio gave Bea a congratulatory hug, while John Lloyd greeted the fans inside the jampacked cinema.

POST-PREMIERE PARTY. During the celebration at Chef's Quarter in the Atrium of SM Megamall, PEP (Philippine Entertainment Portal) was able to chat with the director and the film's lead stars, who were clearly elated by the premiere's strong turnout.

The box-office director added that she was very happy with Bea and John Lloyd's performance in her movie. "Natutuwa ako sa dalawa kasi nailabas nila ang gusto ko at kailangan ko for the movie to work. I am so proud and I know that this is not a full-on-drama kind of movie, but I hope that Bea and John Lloyd get noticed, as well as the supporting cast," she enthused.

Direk Cathy was surprised that despite the three-year respite, Bea and John Lloyd were able to exceed her expectations, especially for the required kissing scenes. "I explained to them that this is not a typical love scene or a kilig scene, you say so much more than that. Sabi ko kunin niyo sa puso at kung anong sinasabi ng puso niyo, lalabas sa kiss niyo and they did it."

Malaysian actor-director Hans Isaac, who played Bea's love interest in the movie, said he enjoyed working with the entire cast and team of Miss You Like Crazy. "The cast and crew were very passionate. Bea was fun to work with, she would tease me a lot. John Lloyd was very quiet, I think it's because he was in his character a lot," he related.

Hans also told PEP that working here is very different from his country, which has a strong censorship board. "Like in Malaysia, you cannot kiss a girl on the lips," he pointed out. Hans added that he is open to doing more showbiz projects in the Philippines.

Before the party ended, PEP caught up with Bea and John Lloyd for a short chat. "Sa akin napaka-essential sa would-be success for this movie that I am claiming at this point, dahil kung hindi sa three years na yun we wouldn't have grown as actors," said John Lloyd.

John Lloyd was humbled by Direk Cathy's comment that he and Bea are two of the best actors of their generation. "There is still so much for us to learn but it is always nice to have someone appreciate your hard work, pero mas masarap mag-focus sa mga bagay that will continue to provide drive, intensity, eagerness and knowledge."

Fans will have to wait for some time before they can see Bea and John Lloyd collaborate again for another project. They will star in separate TV shows: Bea in an upcoming teleserye with Gretchen Barretto, and John Lloyd in a project with Angel Locsin.

One thing is for certain though, based on the outpouring of support during the premiere, the fans surely won't mind the waiting time. They'll miss the John Lloyd-Bea loveteam like crazy!