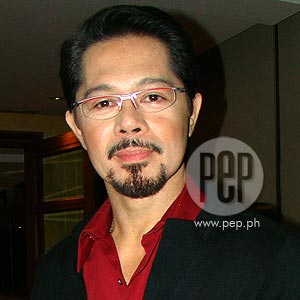 "This is not going to be an easy fight, but I'm happy to be fighting again. Alam mo naman kapag Batangueño mahilig lumaban," says Christopher de Leon about his bid in Batangas this 2010 elections. He is running for a Board Member position in the 2nd district of Batangas.

Multi-awarded actor Christopher de Leon wants to slightly change his showbiz image so he easily accepted the role of Larry in the newest episode of GMA-7's SRO Cinemaserye, Meet The Fathers.

"I need a little change. I need to lighten up a little bit kasi puro suplado ang mga roles, but istrikto ang mga roles ko lately," he said during the media junket prepared for the cast of the show last February 5 on the 17th floor of GMA Network Center.

In this four-part episode of Meet the Fathers, Christopher will be using his comic side after playing the character of Gordon in GMA-7's ChristmaSerye Sana Ngayong Pasko.

HECTIC SCHEDULE. Maybe one of the reasons Boyet wants to play lighter roles this time is because he's trying his luck again to be a public servant in Batangas. The actor currently divides his time between showbiz and his campaign to be a Board Member of the 2nd district of Batangas (composed of six municipalities: Bauan, Lobo, Mabini, San Luis, San Pascual, and Tingloy).

Christopher travels back and forth to Manila and Batangas to attend his appointments in showbiz and politics. "Right now, I'm here. Then, tomorrow I'll be in Batangas again and the day after tomorrow. Three days in Batangas, dire-diretso ako. Uuwi lang ako for commercial shoot. After that, I'll go back to Batangas," he told PEP (Philippine Entertainment Portal).

The Drama King also admitted that he rarely has time for his family because of the election and his TV projects. After Meet the Fathers, Christopher will also be part of the cast of the upcoming GMA-7 fantaserye Panday Kids.

Boyet also explained that juggling his time between showbiz and the election campaign is not really tiring because, "Meron naman akong natutulugan sa Batangas. If I have spare time, I go home and play with the family. Kapag wala namang taping, sa bahay na rin ako natutulog. I live in Las Piñas and that's like an hour or para kang pumunta sa Quezon City."

RUNNING FOR PUBLIC OFFICE AGAIN. The actor first offered his services to the Batangueños when he ran for vice governor but lost to Marc Leviste.

This coming May elections, Christopher will try his luck again in politics by joining Vice Gov. Leviste and Gov. Vilma Santos in their political party.

He says that unlike in the past election, he's more comfortable campaigning for the position he's running for right now. "It's a lot easier now than before kasi, before it's the whole province. Now, it's only the second district. I feel very, very, comfortable going around the six towns and islands, ang saya!"

When PEP asked what his priority would be if he gets elected, Christopher replied, "I am an environmentalist, that's my first priority-to be the voice for the environment sa Sangguniang Panlalawigan. Of course, may mga forest areas doon [sa 2nd District ng Batangas] that have to be protected. Since times are changing, we know about climate change. Since it's a coastline area, we have to make sure that we have something concrete for rehabilitation in case of disaster.

He added that once elected, he would find a way to be very visible to his constituents.

"Sa [town ng] Mabini, I have a place beside the beach. 'Yong Lobo [where Christopher has a property] naman that's like an hour away from the Kapitolyo, so I think I will have to buy a townhouse in Batangas City because nandoon ang Sangguniang Panlalawigan, nandoon ang mga sessions. Siguro kung papalarin, meron akong opisina. I will have to look for a way to fix my schedule."