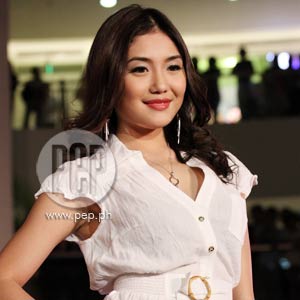 StarStruck V finalist Nina Kodaka plans to return home to Japan after the contest to accompish the necessary documents that would enable her to pursue a showbiz career in the Philippines.

Regardless of the final outcome of this year's StarStruck V, Japanese-Filipino Nina Kodaka is determined to follow her childhood dream of becoming an actress.

GMA-7's reality-based artista search will conclude its fifth season on February 21 at the Araneta Coliseum in Cubao, Quezon City.

In an interview with PEP (Philippine Entertainment Portal) last Thursday, February 4, following the mini-fashion show staged by the remaining finalists at the Activity Center of TriNoma Mall, Nina mentioned the sacrifices she had to endure just to make it here in the Philippines.

Nina auditioned for StarStruck while in Japan, and leaving her home country to stay in Manila for an indefinite period was not an easy decision.

Like many other artists before her who grew up in another country, Nina's apparent weakness is her difficulty in speaking our national language. While most viewers find the broken Tagalog endearing at first, Nina understands that it could also be a career drawback in the long run if left uncorrected.

MEETING IWA MOTO. Now that the fifth season is about to end, Nina said she's both excited and sad at the same time. The remaining contenders share the same sentiment about not wanting the show to end.

Among her batchmates, Nina singled out Diva as one of her closest friends. She used to like Sarah Lahbati but a particular incident prompted Nina to have a change of heart.

According to Nina, Sarah voted for her ouster in the competition one time without considering their friendship.

Sarah defended her action, however, by explaining that it was her strategy to motivate Nina, not put her down.

But Nina's face brightened when asked about her encounter with sexy actress and former StarStruck alumna, Iwa Moto. Both are half-Japanese and Nina considers Iwa a role model, citing the actress's determination to succeed as a trait worth emulating for any newcomer.