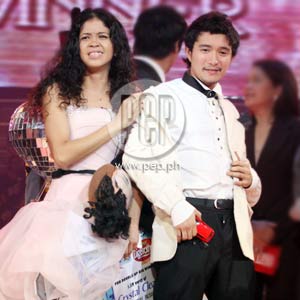 After spending 19 weeks under the closely monitored Big Brother house, Melai Cantiveros was proclaimed the Big Winner during the "Big Date on the Big Night" of Pinoy Big Brother Double Up held earlier tonight, February 13, at the Ninoy Aquino Stadium.

Melisa, the lone woman in the Big 5, got the most number of text votes that enabled her to beat the four male finalists—Paul Jake Castillo, Jason Francisco, Johan Santos, and Steve "Tibo" Jumalon.

Instead of having just four housemates on the Big Night, the organizers decided that the Big Five will battle it out for the chance to win the prizes in store for the Big Winner.

During their stay inside the PBB house, the Melai-Jason team became very popular and their tandem is now commonly called Melason. The two became a couple a few days before the Big Night.

As the Big Winner, Melai won a cash prize of P1 million, a P2.5 million house and lot, and a 40-inch LCD TV screen. She will also get to travel with a companion to three key Asian destinations as well as become the owner of a water refilling station franchise. In addition, her chosen charity will be able to receive P1 million cash.

The third edition of Pinoy Big Brother was known as Double Up for having two houses, two sets of housemates as well as introducing twins during the first few weeks. During this edition, a Big Brother Swap took place wherein Cathy Remperas was sent to Big Brother Finland for a few days. In exchange, Kattlin Laas of Finland entered the PBB house and became particularly close to Hermes Bautista.

This edition also marked the first time that a married couple entered the PBB house together. Jimson Ortega was eliminated early on during the show while Kath Lopeña-Ortega was one of the last housemates to be evicted before the Big Night.

The last housemates introduced to the public were Sam Pinto and Rocky Salumbides.

Before the announcement of the winners, it was also revealed that the third season of PBB Teen Edition called "Clash of 2010" will start this summer.