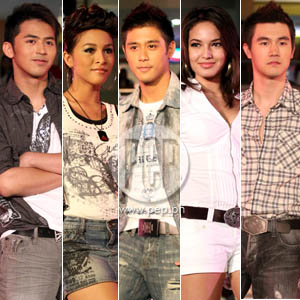 StarStruck Final 5: (from left) Enzo Pineda, Diva Montelaba, Rocco Nacino, Sarah Lahbati and Steven Silva. They will compete in the Final Judgment to be held on February 21 at the Araneta Coliseum.

Three boys and two girls will be competing at the Final Judgment of GMA-7 reality-based artista search StarStruck V on February 21 at the Araneta Coliseum in Cubao, Quezon City.

In the live elimination held earlier tonight, February 14, it was announced that Sarah Lahbati, Rocco Nacino, Enzo Pineda, Steven Silva and Diva Montelaba are the five survivors who will fight it out for the two titles at stake-Ultimate Male Survivor and Ultimate Female Survivor.

These five survivors bested nine others who made it to the Final 14 and more than a thousand others who auditioned for the fifth season of StarStruck. This is the first time in the history of StarStruck that five survivors made it to the Final Judgment. The first three seasons had four finalists and two winners while the fourth season had six finalists and four winners.

On the other hand, it was a heartbreaking Valentine's Day for Filipino-Japanese Nina Kodaka after failing to make the final cut when she was eliminated in tonight's episode.

Fifty percent of the votes came from text and online votes and the remaining 50 percent came from the members of the StarStruck Council, which is composed of talent manager Lolit Solis, actress Iza Calzado, and TV and stage director Floy Quintos. However, this week, the viewers and the Council members had to vote for five survivors who they want to be included in the Final 5—or their My5—instead of the usual single vote.

Before the announcement of the Final 5, hosts Dennis Trillo and Carla Abellana announced the total number of viewers' votes and the average score from the StarStruck Council that each of the Final 6 obtained since Week 1.

However, these votes do not include the My5 votes from the viewers and the StarStruck Council this week and the text votes from the previous week when there was no elimination.

The Council members also revealed whom they did not include in their My5. Both Manay Lolit and Iza chose not to include a female survivor while Direk Floy did not say if he dropped a boy or a girl, although he revealed that he based his vote on talent.

For ten weeks, the survivors went through several "artista tests" to hone their acting, singing, and dancing skills, and even their personalities, under the supervision of mentors Gina Alajar (acting), Jai Sabas-Aracama (singing), Douglas Nierras (dancing), Barbi Chan (grooming and makeup), and Abbygale Arenas-de Leon (image).

In the final week of StarStruck V, the five remaining survivors will undergo more rigid artista tests to determine who among them will be crowned Ultimate Male and Female Survivors.