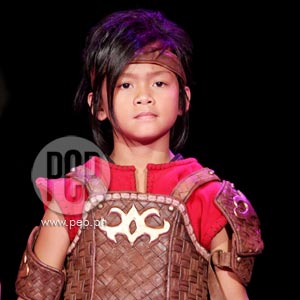 All the stunts and action scenes will come handy for child actor Buboy Villar as he stars in GMA-7's upcoming primetime offering, Panday Kids .

Robert "Buboy" Villar had no inkling on the role he would play in the continuously expanding Panday franchise.

Although he was part of the modern movie adaptation shown last year at the 35th Metro Manila Film Festival, Ang Panday, Buboy's role was relatively minor as compared to the other big stars tapped to give life to the story of the iconic blacksmith.

The blockbuster success of the film version which starred Bong Revilla Jr. encouraged GMA-7 to come up with a spin-off meant this time for primetime viewing. But instead of rehashing previous installments, the network has decided to modernize the legend by introducing new characters who will represent a new generation of superheroes.

The series, which will premiere on February 22, had a grand press conference last night at Studio 5 of GMA Network Center in Quezon City.

Buboy is no stranger to delivering and witnessing action scenes. Most of Buboy's previous television projects are of the action-fantasy genre like Super Twins (2007), Zaido: Pulis Pangkalawakan (2007), Zorro (2009), and Darna (2009). Even his old project with ABS-CBN, Pedro Penduko at ang mga Engkanto, back in 2007 leaned in that direction.

The pressure placed on Buboy's young shoulders is undeniable. Playing the lead means additional responsibility and dedication. He has to undergo fight training for the role of Oliver.

Is it hard playing a lead role, given all the demands and expectations from top management?

NO RIVALRY WITH ZAIJIAN. Buboy is being considered as one of the Kapuso network's top child stars. It's inevitable for him to be pitted against ABS-CBN's own bet, Zaijian Jaranilla of May Bukas Pa fame.

The supposed rivalry between the two continues to tickle the viewers fancy. Here is Santino (Zaijian's character in May Bukas Pa), the religious soft-spoken boy against the street-smart Ding (Buboy's role in Darna)—two contrasting images that shape a child-star rivalry in modern television.

A television commercial produced by a popular milk brand featuring Buboy and Zaijian failed, however, to stop the brewing competition.

Nevertheless, the rivalry is not lost on Buboy who's aware that he and Zaijian are being pitted against each other by the media. Being asked about Zaijian has in fact become commonplace for the tan-skinned child star.