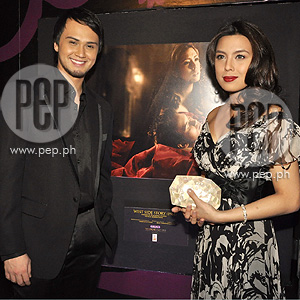 "I hope [for] something mas exciting next year, kung sa amin pa ang Oscars," said Velvet channel head Ronald Arguelles (not in photo) about making Tribute to the Oscars photo exhibit an annual tradition. The second Tribute was unveiled last Thursday, March 4, at the Ayala Museum in Makati City. (In photo) Billy Crawford and Nikki Gil, whose photo depicted the famous characters of Tony and Maria in West Side St

Three days before the 82nd Academy Awards, Velvet Channel put up another photo exhibit to pay tribute to the Hollywood movies that bagged a number of Oscars in the past.

On its second year, Velvet's Tribute to the Oscars photo exhibit showcased local celebrities who posed like the Hollywood actors to recreate scenes from the chosen Oscar-winning films. The photographs were unveiled last Thursday, March 4, at the Ayala Museum in Makati City.

He was very satisfied with the output. "They were all exciting. They were actually very, very experimental also. They envisioned their pictures kung paano lalabas ito."

The movies highlighted in the exhibit included the classics like Gone With The Wind (1931), Casablanca (1942) West Side Story (1961), and Bonnie and Clyde (1967). The unforgettable roles were portrayed respectively by Jake Cuenca and Maja Salvador; Jericho Rosales and Maricar Reyes; Billy Crawford and Nikki Gil; and Shaina Magdayao and Jericho Rosales.

From this decade's movies, Velvet chose Raimund Marasigan and Melissa Rics for Lord of the Rings: The Return of the King (2003); KC Montero and Solen Heusaff for Phantom of the Opera (2004); Isabelle Daza and Bea Soriano for Brokeback Mountain (2005); Kim Chiu and Marc Nelson for Memoirs of a Geisha (2006); and Gerald Andeson and Ali Klaus for Inglorius Basterds (2009).

THE PRE-OSCAR PARTY. Following the Hollywood tradition, Velvet held the local version of a pre-Oscar party, which recognized the participation of celebrities and the creativity of the people behind such riveting photos.

For the minor awards, emphasis was given on the makeup, styling, effects, and the photograph itself.

Make-up artist RB Chanco received the Best Transformation award for doing Casablanca, stylist Erica Paredes won the Best Costume Design for Forrest Gump, while Pat Dy was hailed as the Best Photographer. The Best Use of Effects award was given to the group of Lord of the Rings: The Return of the King.

Enchong Dee and Erich Gonzales were hailed as the "Perfect Pair" for their portrayal of Jack Dawson and Rose DeWitt Bukater characters in Titanic.

The "Bagay na Bagay" award was given to Shaina Magdayao and Zanjoe Marudo for pulling off the characters of Bonnie Parker in Bonnie and Clyde and Vincent Vega in Pulp Fiction, respectively.

Jake and Maja's Gone With The Wind gained the most number of votes from the invited guests, thus, making it the recipient of the People's Choice award.

The major awards were divided into three. The Bronze award was given to the team of Titanic. The Silver award went to the team who did Bonnie and Clyde. And the photograph that topped the other 13 entries was Casablanca.

In between the awarding, the guests were entertained by Richard Poon and Karylle, who participated in the last year's Tribute. Together they sang "The Time of My life," the famous theme song of Dirty Dancing.

The public can view the exhibit during its two-week run, March 5 to 12, at Greenbelt 3, Makati City; and March 13 to 20 at the Eastwood Mall in Libis, Quezon City.