The country's brightest stars and industry movers celebrate a decade of YES! 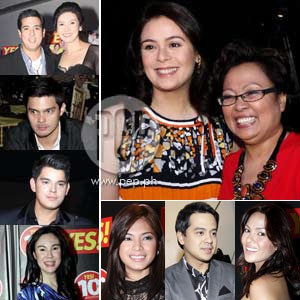 The biggest and brightest stars, along with the top executives of the three major networks, gathered last night, February 23, to celebrate the 10th anniversary of YES!, the number one entertainment magazine in the country.

The NBC Tent at The Fort, Taguig City, was witness to the star-studded event—a night of music, laughter, friendship, and camaraderie among popular celebrities, the people behind YES!, its sponsors, and just about anyone who has given support to the magazine throughout the past decade.

Celebs who let their hair down to party included more than 100 stars and showbiz personalities, making the event the most star-studded affair of the year.

ROLL CALL. Some stars walked the red carpet before the program started; other stars who had a busy schedule that day arrived later. Showbiz stars and executives, talent managers, writers and directors were coming and going all the time.

Dingdong Dantes, one of the most anticipated stars of the night, arrived long after the program had ended. Dingdong is also being handled by Perry. His girlfriend Marian Rivera failed to attend the event because she was taping for the sitcom Show Me Da Manny.

Angel Locsin and John Lloyd Cruz came in separately, but both were very late, when only a few guests were left inside the ballroom. But they were still a very welcome presence.

Angel was reunited with GMA-7 senior program manager Redgie Magno, who handled some of her shows in the Kapuso network before, like Darna and Asian Treasures. John Lloyd had a handshaking moment with veteran actor Eddie Garcia, when the latter praised him and said he was doing a good job.

MAIN EVENT. The main program started with YES! and PEP editor-in-chief Jo-Ann Maglipon's greeting, "Good evening, everyone!" She introduced the staff members of YES! and PEP one by one as they came up the stage.

After this, Jo-Ann called on Summit Media president Lisa Gokongwei-Cheng, who paid tribute to the late talent manager Douglas Quijano, who served as editorial consultant of YES! from the very first issue of the magazine.

"He knew that YES! has potential. He knew that it would be a chronicler of the entertainment world... Douglas, you are missed by us and the industry," Lisa said. She noted in particular how Douglas never interfered in the magazine's coverage, even when YES! had to write about controversies involving his talents—which is the mark of a true editorial consultant.

Then, Mr. Lance Gokongwei—COO of JG Summit Holdings and chairman of Summit Media, which publishes YES!—thanked all the guests who came for the evening, plus the advertisers and sponsors of YES! for their continued support.

"Let's raise our glasses to YES! Magazine's 10 more years of success!" he told the audience.

After this, the program quickly segued to a musical number from the singing trio La Diva—composed of Jonalyn Viray, Aicelle Santos, and Maricris Garcia—who fired up the night with their rendition of Whitney Houston's "Queen of the Night" and En Vogue's "Free Your Mind."

Multi-awarded singer Bituin Escalante then sang Mariah Carey's "Hero" and Florante's "Handog," which was the introduction to the audio-visual presentation on YES! Magazine's 10 years.

The 15-minute audio-visual presentation showed the history, triumphs, the special issues and other work of YES!

Then, Jed Madela belted out a medley of some of the best-loved OPM songs, which was heavily applauded, and followed it up with an upbeat version of "Stand By Me." He was followed by Rhap Salazar, who sang a nationalistic song titled "Galing ng Pinoy."

The WCOPA champions then, together, coaxed a still-shy audience to dance and have a good time with Black Eyed Peas's "I Got A Feeling." This ended the program proper.

OPEN MIKE. Seconds after, Ricky Davao and Tirso Cruz III walked up the stage to host the open-mike session, and convinced several stars to go on stage to sing impromptu, accompanied by a pianist working the keys of a baby grand.

The party ended at a little past 1 a.m., but at 1:30, John Lloyd perked up things again, this time for the staff that were still there. He had just come from the premiere of his movie Miss You Like Crazy, and was still due to return. Meantime, he spent a little less than an hour chatting with the staff and, quite graciously, did not look like he was in a hurry to be someplace else.

Incidentally, when one of the staff said she had a headache, he quickly offered Biogesic, a brand he endorses. Everyone laughed, but he was serious. He said he brings Biogesic with him all the time. "Nasa bulsa ko nga dapat, pero ngayon nasa kotse. I can get it for you," he said. But the staffer turned suddenly shy and said her headache was going away already.

That night, the country's best and brightest stars and the shakers and movers of the entertainment industry came to party with YES!, a magazine that has done a respectable job as chronicler of the local entertainment world for the last 10 years—and which intends, in the words of its chairman Lance Gokongwei, to do the same in the next 10!