Carla Abellana on her relationship with Geoff Eigenmann: "What we have is special." 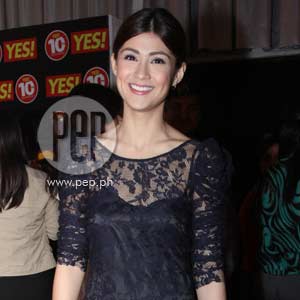 Carla Abellana says she is looking forward to meeting the other relatives of onscreen partner Geoff Eigenmann at the wedding of his eldest brother Ryan to commercial model Cathy Bordalba this Sunday, February 28.

The daughter of former matinee idol Rey "PJ" Abellana said she already met some of Geoff's family, but the upcoming wedding still makes her nervous.

She added, "Well, I've met most of his relatives and, of course, his family. Pero alam kong during the wedding, mas marami pa akong makikilala pa. Excited naman ako. It's something that I look forward to."

It can be recalled that when Carla and Geoff were paired in Rosalinda last year, news reports quickly linked them romantically. However, the 23-year-old actress was quick to say that nothing was going on between her and Geoff. In fact, at Ryan's wedding on Sunday, Carla said she will be introduced as "Geoff's friend."

"Wala namang problema kasi hindi naman talaga anything. 'Yon naman ang totoo, di ba?" she stated. "Really, I know you wouldn't believe na we're just friends. So, yes, I would say what we have is special. Pero not necessarily, alam mo 'yon, labeled as 'we're together' or 'we're an item' or 'we're in love,' walang ganun."

ON HOSTING STARSTRUCK. Carla's hosting stint in StarStruck V ended last Sunday, February 21, when the reality-based artista search had its Final Judgment. This was her first hosting experience since she joined show business last year.

Carla said she would greatly miss the show. "Sabi ko nga, it was an honor and I had fun being a StarStruck host. Mami-miss ko ang StarStruck family ko."

Aside from the show, the newbie host said she would also miss the StarStruck Final 14. "Na-miss ko sila, pero I know that I'll be seeing them around. Hopefully, makatrabaho ko rin sila in the future. Proud ako sa kanilang lahat."

Carla gave a message to the StarStruck survivors who would soon join showbiz.

Steven Silva and Sarah Lahbati were declared the Ultimate Survivors.