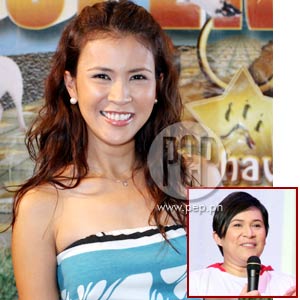 Gelli de Belen defended her sister Janice against critics after the latter was a no-show at her daughter's 18th birthday party last January 23 at the Wack Wack Golf and Country Club in Mandaluyong City.

Inah, Janice's eldest daughter with former husband John Estrada, told the invited members of the entertainment press that her mother was at work at the time, that's why she could not personally grace the occasion. The intimate Hawaiian-themed party was hosted by John as a gift to their daughter.

While Inah completely understood her mother's absence due to work, some people questioned Janice's no-show, speculating that the actress-TV host was simply avoiding John. The relationship between the ex-couple remains testy despite the annulment of their marriage in 2004.

In a separate interview days after Inah's birthday party, Janice affirmed her daughter's statement, saying she had a commitment that day. She also said that being a good parent is not measured merely on a single night of revelry.

Gelli also would rather not comment on her sister's personal affairs explaining that she is not in the position to answer on Janice's behalf.

Even Gelli was not able to attend Inah's birthday because she, too, had a taping for Panday Kids. But her kids with singer husband Ariel Rivera were present and even gave their cousin Inah a nice message during the program.