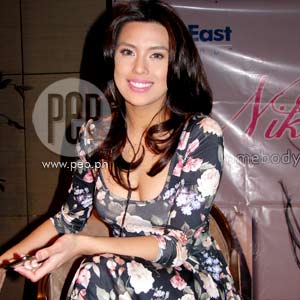 Singer-actress and host Nikki Gil veers away from doing revivals with her latest album under PolyEast Records, Somebody to Love.

Releasing an album composed of all-original materials is a rare event nowadays. That's why singer-host Nikki Gil calls her latest record, Somebody to Love, under PolyEast Records a "brave effort."

"'Yong buong point nitong album na ito is to give the [song] writers here in the Philippines a chance for their music to be unleashed. Because there's so many great composers and songwriters here, sayang naman, di ba? Why settle for something safe if we can explore something that is possibly great dahil atin ito, e, mga sariling writers natin ito," said Nikki on the album's overall concept.

The 11-track album is composed mainly of fresh materials previously unheard before. Even Nikki's rendition of Hale's "Kung Wala Ka" was exceptional, giving the poignant number a new perspective from the viewpoint of a woman.

WORKING WITH BILLY. Even Nikki's boyfriend, singer-TV host Billy Crawford, contributed the song "You Are My Life" in the album. The couple recorded the song together, with Billy himself assuming the role of auxiliary producer during the session.

Working with a loved one was not an easy undertaking, as Nikki realized during the time they were recording the material.

"It was a different experience kasi you know how Billy is so into his music and he's also a producer. He was there when I was recording it and when he was writing it, nandun din ako. So, marami siyang mga 'do it again' na hindi ko naman puwedeng personalin kasi nagtatrabaho kami dun. It was a weird experience but, you know, we got to see a different side of each other. Parang 'yong time na yun, nakalimutan namin that we were in a relationship. We were just working," she narrated to PEP (Philippine Entertainment Portal).

The two were supposed to stage a Valentine concert last February 14 at the SMX Convention Center in Pasay City but the event was cancelled at the last minute. And so, the couple was left without a planned romantic date to mark the occasion as they were busy preparing for the concert.

"It's not like it was cancelled completely," clarified Nikki. "It was just moved to a later date siguro to make way for more preparations. So, wala kaming masyadong nagawa. Kung saan nag-dinner 'yong mga magulang ko, bumuntot na lang kami. Naki-dinner na lang kami," she added with a laugh.

Nikki was only 18 when she had her first relationship with Gabriel "Gab" Valenciano, who is the son of Mr. Pure Energy Gary Valenciano and talent manager Angeli Pangilinan. The romantic partnership, however, did not last and Nikki attributes that to their immaturity in dealing with relationship issues back then.

Though it is not fair to compare one's past love to the present, Nikki cited Billy's maturity as a big plus in how they managed to maintain their relationship.

ON SOP'S DEMISE. Nikki is part of ABS-CBN's Sunday noontime musical variety show ASAP XV. It was reported recently that their rival show, GMA-7's SOP, will be airing its final episode on February 28 due to poor ratings. A new program titled Party Pilipinas will assume its weekend noontime slot on March 21.

While the end of a fierce rival might be considered as triumph from a competitor's standpoint, the pretty singer-host and actress finds no reason to celebrate on this latest development

"I'm not happy about it because these are still co-artists and these are still colleagues kahit na magkaiba ng network. Kami namang mga artists, hindi naman kami ever talaga na-bother sa network wars, it was never an issue for us. Pero I'm sure they have other plans," she said.