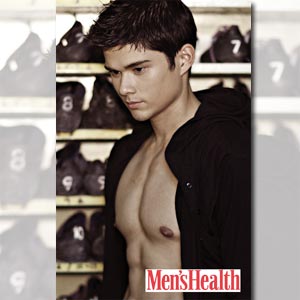 Though fairly new in showbiz, Carl Guevara is determined to reach the top. But how driven is this 20 year-old young man?

During his shoot for the cover of Men's Health, he confidently took on the wall climbing challenge—which he did without a hitch, considering it was his first time.

Carl's determination clearly shows in the way he does things. From career, weight-loss, or life in general—he knows how the wall must be climbed: Take it step by step. And, yes, he's just about to scale the heights of the entertainment industry.

Looking at Carl's physique, it's hard to believe that at 16 years old he had weight problems.

With the guidance of his personal trainer, the model-turned-actor hit the gym and focused on cardio exercises. In a year, with proper diet, he brought down his weight to 148 pounds.

In pacing his career, Carl Guevara takes it slow. He has no demands, no qualms. He's willing to take on anything and work with anyone. "Kasi doon makikita yung versatility mo as an actor,"he said.

Is he ready for the long haul of show business intrigues and long hours?