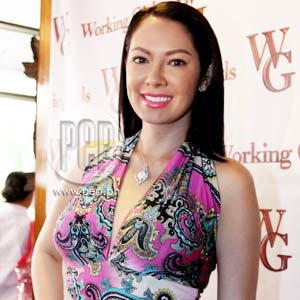 "Hindi pa kasi kami nag-uusap lahat so it's very hard to comment on the merits of the case. But of course my mom ay talagang na-relieved, we're all relieved for Richard," said television host-actress Ruffa Gutierrez on the dismissal of Reckless Imprudence Resulting in Homicide case against her brother Richard.

The Gutierrez family is planning to hold a thanksgiving mass tomorrow, March 19, to celebrate the string of "good news" that came their way during the past few weeks.

Actress-host Ruffa Gutierrez made this announcement at the press conference of the modern sequel of the classic film Working Girls held earlier today, March 18, at Annabel's restaurant on Tomas Morato, Quezon City.

HAPPY FOR RICHARD. On top of the family's list worth thanking for was the dismissal of Richard Gutierrez's Reckless Imprudence Resulting in Homicide case filed by Lorayne Pardo, the wife of his late personal assistant Nomar.

Nomar was killed in a vehicular accident involving Richard on May 22, 2009 in Silang, Cavite. Lorayne sued Richard and held him accountable for the death of her husband.

The Dept. of Justice (DOJ), however, in a five-page resolution signed and endorsed by outgoing Secretary Agnes Devanadera last March 10, dismissed the case, saying that the complaint against Richard has "no basis." (CLICK HERE to read related story.)

Ruffa declined to comment further on her family's reaction, saying that all of them had yet to convene after the resolution was made public. Yet she said, "We're all relieved for Richard because he can finally move on with his life after all the trials that he's been through since last year." .

CUSTODY OF LORIN AND VENICE. Adding to Ruffa's elation was the court resolution issued by the Quezon City Regional Court on March 11 granting the TV host-actress sole custody of her two children with ex-husband, Yilmaz Bektas. (CLICK HERE to read related story.)

Lorin and Venice, Ruffa and Yilmaz's daughters, have been living with their mother since 2007, making the court order signed by presiding judge Jose L. Bautista a formality.

"Now because of the courts and their decision, it's finally legalized, it's official and kailangan ko din talaga 'yon para sa paperwork ng mga bata, to renew their passports, for their school," said Ruffa.

The Turkish businessman is scheduled to arrive in Manila on March 25 for a visit. Incidentally, Ruffa and Yilmaz were married on the same date back in 2003 at The Fort in Taguig, City.

The former The Buzz co-host described her relationship with Yilmaz as "civil." They communicate through text messaging and with her ex-husband's impending visit, Ruffa is hoping that genuine friendship would blossom between them for the sake of their kids.