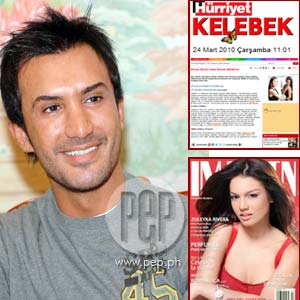 According to Hürriyet, Turkish businessman Yilmaz Bektas is set to wed Miss Universe 2006 Zuleyka Rivera Mendoza (inset) on June 21 at Sardinia Island. Yilmaz is the estranged husband of Ruffa Gutierrez.

This was published in Hürriyet, which was tagged by Wikipedia as "an influential, high-circulation Turkish newspaper," early this morning, March 24.

According to the article, which was written in Turkish and translated by a Turkish national for PEP (Philippine Enetrtainment Portal), the supposed wedding of Yilmaz and Zuleyka will take place on June 21 at the Sardinia Island, the second-largest island in the Mediterranean Sea. It was also reported that the wedding ceremony will begin aboard a yacht.

Assuming that the article is true, this will be the second wedding for the Turkish businessman and first for the former Miss Universe. Zuleyka, a 22-year-old Puerto Rican national, met Yilmaz in 2007.

PEP previously reported about the romantic relationship of Yilmaz and Zuleyka in article published on March 28, 2008 accompanied by a photo of the couple smoking cigars. Our source for that report was also Hürriyet. (CLICK HERE to read related story.)

It was also mentioned that Bektas will give Mendoza the cable channel "Fashion TV Spain" as "a wedding gift." Interestingly, Yilmaz also gave Ruffa Fashion TV Turkey as a gift two years after they got married.

Yilmaz was first married to Ruffa, Miss World 1993 Second Princess. They tied the knot last May 25, 2003 in a lavish Christian ceremony, held at the NBC Tent, and later had a Muslim wedding in Istanbul, Turkey.

The marriage of Bektas and Gutierrez lasted five years and produced two beautiful children. Their separation was announced by the former couple through a joint statement on May 8, 2007. (CLICK HERE to read related story.)

Hürriyet also said that Yilmaz is already "divorced." Although, according to previous reports, Ruffa has not made any formal petition to annul their marriage.

Aside from his children with Ruffa, Yilmaz also has a child with Turkish national Selen Gorguzel.

At press time, the host-actress has yet to issue a statement. PEP sent her a text message at 3:03 p.m. today, but according to her publicist Jun Lalin, who rang PEP at 3:32 p.m., Ruffa is still busy with her pictorial.

Jun added, "Hindi ako sigurado kung sasagot si Ruffa." We ended the call by saying PEP is still open in case she decides to give a statement.

In a previous interview, Ruffa said that Yilmaz is scheduled to arrive tomorrow, March 25, to visit their children. (CLICK HERE to read related story.)