GMA-7's Party Pilipinas off to a rousing start 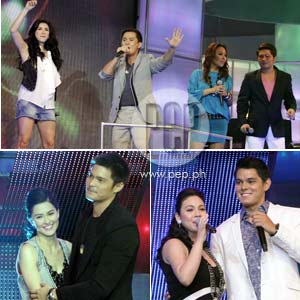 Kapuso stars graced the debut of Party Pilipinas held yesterday, March 28, at Studio 7 of the GMA Network Studios in Quezon City. Some of the celebrities who joined mainstays Regine Velasquez, Ogie Velasquez, Jaya, and Janno Gibbs (top) include Marian Rivera and Dingdong Dantes (below, left) and Claudine Barretto and Richard Gutierrez (below, right).

Palm Sunday turned out to be one festive happening for GMA-7 and the rest of the mainstays of its newest noontime musical-variety show Party Pilipinas.

The network's battalion of stars kicked off the afternoon party through a medley of upbeat numbers, which best represent the kind of party vibe the show aims to achieve this time around.

Regine was particularly excited with the show's "high-production value." Marvin, on the other hand, loved the program's "fresh look" along with the fact that everyone was excited again to work after a few weeks of vacating the Sunday noontime slot.

YOUNG STARS DOMINATE. StarStruck V's Steven Silva, Sarah Labahti, Enzo Pineda, Diva Montelaba, and Rocco Nacino proved that they are all certified crowd drawers based on audience reaction every time they came up on stage.

Adding more glitter and star power to the affair were popular Korean boyband U-Kiss (Ubiquitous Korean International Idol Star) and Hollywood choreographer Fusion. Though considered as a new group, U-Kiss already has a big following here in the country. It was evident that some of those in the audience left Studio 7 of the GMA Network Studios in Quezon City after the group's performance.

"He's really good and it was intimidating at first," Steven told PEP (Philippine Entertainment Portal) about Fusion, who choreographed the young stars in their production numbers. "But it was cool because he speaks straight English so it was easy for me to understand his instructions and he's also from the Bay Area (California) so I can relate to him in a way."

The number featuring fast-rising young stars Joshua Dionisio, Barbie Forteza, Jhake Vargas, and Bea Binene was also an instant hit. Trust Barbie and Joshua to make everyone in the audience swoon with kilig excitement reminiscent of their roles in the series First Time.

Elmo Magalona, the son of the late Francis M., was a revelation bringing the house down with his rap number.

OTHER HIGHLIGHTS. Party Pilipinas also brought together twins Richard and Raymond Gutierrez. Richard showed a different side by doing a dance number.

New acquisition singer-actor Mark Bautista also made his debut as a Kapuso and one of the show's regulars. Mark used to be part of rival program, ASAP XV before deciding to jump ship.

Party Pilipinas will reportedly venture outside its home studio and visit places outside Metro Manila in the coming days to further promote the new program.

Tomorrow, March 30, the whole gang of Party Pilipinas will troop to the Araneta Coliseum to tape their second episode which will be aired next Sunday, April 4.