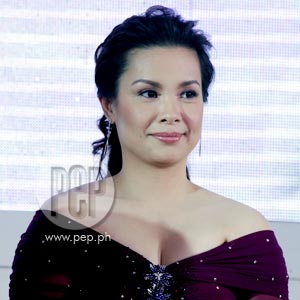 Lea Salonga has not appeared on the big screen since 1995, when she starred in Sana Maulit Muli with Aga Muhlach. Fifteen years later, Lea makes time to shoot another movie with Aga—their third—before 2010 ends.

The world-renowned singer and theater actress was launched as the new endorser of Avon's Anew 360° White earlier today, April 7, at Whitespace, Makati City. During the media launch, she revealed that she plans to shoot her movie with Aga by November this year.

Lea described how excited Aga is to start shooting for their movie. "Whenever my husband [Robert Chien] sees Aga in the gym, Aga says, 'Okay, we're gonna shoot on November. We're gonna shoot on November. We're gonna do this movie for sure.' So medyo kinukulit yata ni guwapo [referring to Aga] yung asawa ko. So I'm really excited. I know I won't be traveling that much. If we do travel, maybe for a weekend, or a week here but somewhere lang in Asia. I'm not traveling too far."

Lea will host the 44th Visionary Awards on April 19 at the Hilton Universal City in Los Angeles. Her co-host will be Japanese-American actress Tamlyn Tomita.

Starting this May, Lea will be rehearsing for her role as Grizabella in the Broadway musical Cats. It will be staged at the Cultural Center of the Philippines starting July 24.

When it comes to the plot of the movie, Lea would like to do something similar to the Meryl Streep-Alec Baldwin movie It's Complicated.

"I'm thinking okay, I'll be three months away from 40. Which means I'll be 40 when it is actually released. What are they gonna make us do? I was on the plane coming home when I watched It's Complicated. And I was like, 'He's older and they're sexy. Oh my God!' If they can think of something... it doesn't have to be exactly like that but it has to be something that makes up a good story."

RICKY MARTIN'S COMING OUT. Members of the press then curiously asked Lea for her reaction to international singer and former Menudo member Ricky Martin's announcement that he is a "fortunate homosexual man." (CLICK HERE to read related story.)

Last March 29, the Puerto Rican singer came out by writing an entry on his official website, ending years of public speculation. Ricky, who began his career with the boy band Menudo, is best known for his hits "Livin' La Vida Loca" and "She's All I Ever Had."


Lea pointed out that she was "proud and happy" when Ricky admitted the truth about his sexuality.

"You have no idea. I was so proud and happy. For a lot of people maybe it wasn't new but it's still a proud moment," she said. "It's one thing for people to know, it's a whole other thing when the person actually says 'I am gay' to the world on their own terms when they're ready. And it's an incredibly, incredibly proud moment for me as somebody who has worked with him and knows him.

"And as somebody who has many gay friends and relatives and family members, colleagues, it's an amazing, amazing thing. And for him to be as visible as he is, to be a huge pop star, and to come out, it is so huge. It's so amazing and it makes me feel so proud."

Did Lea ever become romantically involved with Ricky in the past?

"Oh, heck no!" she quipped. "No. We were paired up in a video when we were both teenagers but we never dated.

When was the last time she saw Ricky?

Did Lea have an inkling that he was gay?

"Well, I think my own speculation probably mirrors what the public was thinking. Parang, 'may dalawang anak na siya pero walang girlfriend.' That's a little out of the ordinary, you know. So for that, that's probably again my own suspicions. And maybe I always had some feelings that maybe he was, but I really never thought of it because you know what, for anybody to think about, when he's ready and he's really gay, he will come out when he's ready," Lea said.