SUMMER IN BORA UPDATE 2: Joem Bascon enjoys the best of both worlds—sports and showbiz 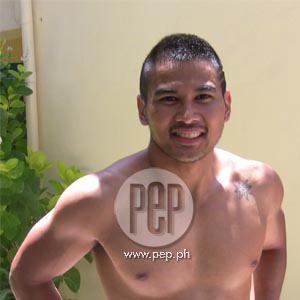 On April 24, he will play the touch football game. (According to the book Playing Touch Football is "a game where players can touch the individual carrying the ball with one or two hands—whether one is playing the one-hand touch or two-hand touch variety—as opposed to tackling him bodily to the ground or forcing a knee to touch the ground, as is normal in traditional rules versions of the game.")

He's been into sports almost all his life, so playing a new game no longer makes him uneasy. It actually gives him a natural high.

Did you know that his childhood dream was to become a professional cager?

The 21-year-old actor was a varsity player from grade school to high school, but "sa college, mahirap pala pumasok." He was then an electrical engineering student in University of Santo Tomas, "Sinubukan ko...Nag-try out ako, pero mahirap. Hindi ako pinalad," he said.

As fate would have it, his calling is not to play on the basketball court, but to play various characters on television and in the movies.

He just finished working on his indie films, which are both entries in the Cinemalaya Festival—the Recruit and Limbunan. At present, he's reading a script for another digital film project.

Does he have any regret?

He actually works out every day, "as in seven times a week!" Pursuing a healthy lifestyle has become part of his routine. Despite his hectic schedule, he finds time for his favorite sports—basketball, boxing, and swimming.

Joem is glad that even if things didn't happen the way he initially planned, he's now enjoying the best of the both worlds. "Kaya, say no to drugs, sports na lang!" he said with a smile.

Update 3: Derek Ramsay becomes one of the beach's tourist attractions