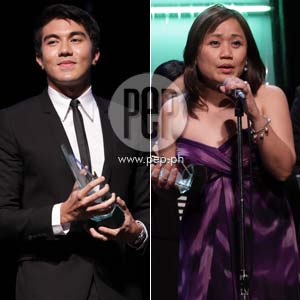 The Star for All Seasons and the young Kapamilya drama actor took home the Movie Actress of the Year and Movie Actor of the Year trophies, respectively, for their performances in Star Cinema's In My Life.

Unfortunately, they were not able to grace the special occasion for personal reasons.

HONORING BOTH WORLDS. The Philippine Movie Press Club continues its tradition of recognizing independent film projects by classifying some of the awards given as either mainstream or digital.

The other winners were:

Asia's Songbird Regine Velasquez represented Ogie Alcasid who won Movie Original Theme Song of the Year for his composition and interpretation of "Tanging Ikaw," which was used for the movie Ang Panday.

The star-studded affair was hosted Boy Abunda, Ruffa Gutierrez, and Lorna Tolentino. Toni Gonzaga and JC de Vera served as trivia hosts as they shared valuable facts on the history and evolution of the movie industry.