Late comedian Palito loved to entertain until the very end 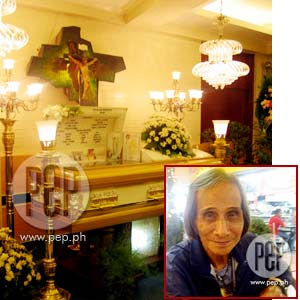 Reliving his glory days as one of showbiz's most popular comedians always gave Palito a natural high.

Even when he was pushed away from the spotlight due to lack of film and television projects, he did not drop his funnyman demeanor. His close friends described him as "palakaibigan" and "marunong makisama."

However, Reynaldo Hipolito (Palito's name in real life) never complained about his failing health. According to his son Jhun, the 76-year-old comedian, would just stay home and rest rather than consult a doctor every time he felt ill.

Palito passed away Monday, April 12, while confined at the Philippine General Hospital (PGH) due to complications from lung problems. He was initially rushed to the Imus Family Hospital in Cavite after complaining about severe abdominal pain. The comedian was later transferred to the PGH upon the endorsement of Senator Ramon "Bong" Revilla Jr., who volunteered to shoulder the hospital bills.

Jhun felt that his father's delicate condition was aggravated by the fact that they were not able to seek medical help immediately due to financial constraints. It was reported that Palito was admitted to the hospital for a month prior to his last confinement. A CT scan (Computerized Tomography) was recommended by the doctors to properly diagnose the problem but the family was not able to afford it.

NO REGRETS. Jhun illustrated his father as a humble man who could easily make friends because of his easygoing nature. The man enjoyed making people laugh.

Last night marked the second day of the comedian's wake and among those who paid their last respects were Bayani Agbayani, Jose Manalo, and Imelda Papin. Comedy King Dolphy and even former President Joseph "Erap" Estrada plan to visit any day this week before the cremation on Saturday (April 17) morning.

Estrada was able to visit Palito at the PGH the night before the comedian expired. Seeing the former president was one of Palito's final wishes, said Jhun. Despite his condition, the comedian was obviously pleased to see Erap at his bedside.

It was previously announced that the remains lie in state at the Funeraria Floresco in Pedro Gil, Manila. But the family decided to move the body to the more spacious Loyola Memorial Chapels & Crematorium in Guadalupe, Makati City, with the help of GMA-7. Jhun also thanked ABS-CBN and other media groups for extending support to their family since day one of his father's confinement.