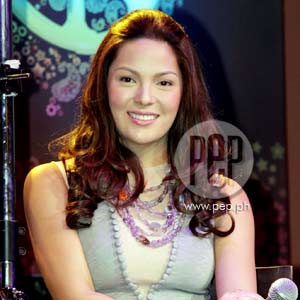 KC Concepcion's latest record conveys some of her innermost feelings through words and music. Gone are the cover tunes, which comprised the actress-singer's hit debut album, a.k.a. Cassandra (2008).

Slowing down from her acting career gave KC the chance to write down her thoughts and reflect on life in general. Life has been a roller-coaster ride for KC ever since she decided to join showbiz full-time in 2008.

KC wrote three songs—"Magandang Umaga," Takipsilim," and "Worth the Wait"—to complement the nine other original tracks included in her latest effort.

KC singled out the tracks "Breathe You" and "Hulog" as two of her favorites, mainly because of their message and feel-good quality.

TAKING THE SAME ROUTE. KC's career path is starting to resemble that of her mom Sharon Cuneta's. The 25-year-old actress-model is no longer bothered though by comparisons to her celebrity parents or by the burden of expectations placed on her young shoulders.

"Actually ngayon, I've come to terms with it," revealed KC. "Ang naiisip ko lang, free for all. Kumbaga, if you have the heart for it then you have the right to be in it and never naman niya [Sharon] akong pinigilan or pinaramdam sa akin na kanya lang 'to, teritoryo niya 'to or something."

KC couldn't help but notice the growing number of celebrity children following their parents' footsteps. It's a good sign, said KC, and she's glad that most of them are doing well enough to create their own identity.

NEW THE BUZZ CO-HOST. Last Sunday, April 11, KC was formally introduced as the newest addition to ABS-CBN's showbiz talk show, The Buzz. Hosting an entertainment program is something new for KC and it didn't help that she's taking the spot vacated by the show's former regular, Ruffa Gutierrez.

Is there someone she would like to interview in the near future?

"Tita Kris [Aquino]," she replied. "Well, she's obviously good at what she does."

A one-on-one interview with her father, Gabby Concepcion, would also be interesting, said KC.

KC, who celebrated her birthday last April 7, was of course referring to her close relationship with all her half-siblings by both her parents.

"Lahat kami in touch," she smiled. "To be in touch with my sisters and also to let Frankie and Miel [KC's sisters with mom Sharon and stepdad Sen. Francis Pangilinan] know that I also have other sisters and to see that open sila doon and very generous naman sila na hindi sila nagta-tantrums about it or anything.

"Medyo mahirap kasi yun, e. Yung parang masabi sa kanila na, 'Hey, this is what's happening and I love you. I'm your ate for life, you're my baby sisters for life. But I want you to know I also have sisters in Papa's [Gabby Concepcion] side'. Pinakita ko yung pictures nila and talagang napaganun si Frankie, 'Ate, she really looks like you!'" beamed KC.