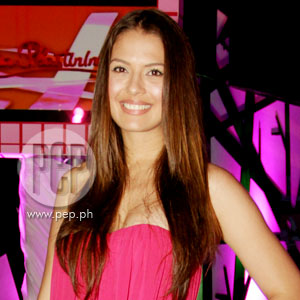 "Did they [Paparazzi] mention John? Was it written anywhere or mentioned anywhere that the man in the blind item is John? Unfortunately in the Philippines, people like to make blind items and issues out of anything and whatever. If John's name is mentioned, then it's not a blind item anymore. It's not a rumor anymore. And most blind items are not true. If it's true, then they would not be called blind items," says the Brazilian model who is engaged to

Last April 16, a party was held for 17-year-old Russian fashion designer Kira Plastinina. She opened her first store in Asia here in the Philippines and the event held at The Establishment in The Fort, Taguig City, last Friday was her farewell party for her new Filipino friends.

Among the celebrities present was Brazilian model and former Miss Earth Priscilla Meirelles who's engaged to actor John Estrada.

Recently, Priscilla's name was dragged into an issue involving a blind item presented on TV5's new showbiz talk show Paparazzi. Right after one of the show's hosts Cristy Fermin presented her blind item, co-host Ruffa Gutierrez mentioned off the air to reporters covering the live pilot telecast last April 11, that Priscilla texted her and asked for Cristy's cell phone number.

With the clues given by Cristy and Ruffa's claim that Priscilla texted her, the showbiz reporters presumed that the subject of Cristy's blind item was no other than Priscilla's fiancé John Estrada.

The blind item is about an actor who checked into a hotel with a married actress. (CLICK HERE to read related article.)

TEXTING RUFFA. PEP (Philippine Entertainment Portal) caught up with Priscilla and asked her if she really texted Ruffa to ask for Cristy's number.

"Did she really say that? She said that I texted her?" asked Priscilla. "Well, if she said that, then probably, I did. I believe that I'm free to text anyone and ask anyone's number. And Cristy is a friend of John's and a friend of mine. I can call her any time I want and ask her anything I want."

She said she knows Cristy's cell phone number, "but if my phone crashed and I need the number of a friend, I can always ask a friend for someone's number."

MAN IN THE BLIND ITEM. Priscilla added that it is not important if she texted Ruffa or Cristy about the blind item or not.

The Brazilian beauty said she is not affected by the blind item even if other people think it is referring to her boyfriend. "No. I am not affected. And if I need to know about it, I can always call anyone to ask about that."

Priscilla also shared what she thinks of the show.

"It's a new show, and I'm pretty sure all they are trying to do is call attention by using John. And now they want to use me by mentioning my name. I guess they just want to make news for their show. Maybe they should use other people."