Ian Batherson wants to stay single while in showbiz 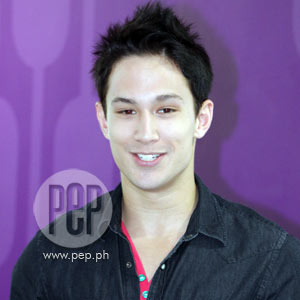 Ian Batherson said GMA-7 is giving him a new project, but it's still under wraps. "There's a couple of shows but I can't really talk about it right now but I'm throwing it out there that there are new shows," he said.

Note to fans of StarStruck V Avenger Ian Batherson: this month, you might want to take the MRT more often. The 21-year-old hunk from the United States told PEP (Philippine Entertainment Portal) last Friday, April 16, that he still takes the train to go to work.

"Not so much. Minsan lang," he said in Tagalog strongly flavored with an American accent. "I take the MRT because I live far from GMA. So if I'm late, I ride the MRT."

Ian admitted that he gets recognized when he's on the MRT. There was even one guy who followed him onboard from the ticket booth. "He just looked at me during the whole trip. Kinda scary. It was a guy. Just stuff like that. Kinda flattering in a weird way."

But Ian said it's a great way to keep in touch with fans. He will stop doing this by June, however, because by then he would have a car.

"It's a Lexus RX300. It's been my car for awhile in the States. My dad's gonna ship it here, because he's in the military and the shipping's free. I'll be happy driving around. I won't have to take the taxi all the time," he said.

NO RUSH. Currently, Ian is happy being one of the party jocks of Party Pilipinas, GMA-7's new Sunday variety show. He's satisfied with this project for now because he does not want to rush his career.

"I think the trick is to be patient and just don't rush everything. Because sometimes my tendency is to rush and that's when it turns out weird. So I just have to pace myself and take my time. Relax."

Ian said in the past, rushing got him "nowhere." "It just puts more stress on me. But when I just relax, stuff comes to me. When I rush, you know, it seems like it takes forever to get somewhere. I just need to count my blessings. Be patient, and I just really have to enjoy the ride."

"No, I don't have a girlfriend. Kasi sa showbiz, di ba, kailangan mo talaga maging single? So, I mean, I'm down to be single. I just really have to be patient with my career, because sometimes I'm like, 'I want this, I want that, I want this.' But in reality, you can't rush. Try to calm down," he said.

Ian also allows a year before he can kick out the strong foreign accent from his Tagalog.

"Yeah. When I talk to them, they find it cute. So, maybe I can just remember pag ayos na yung Tagalog ko, just remember how I used to speak if I need to bring it out. They do, pretty fun," Ian said.