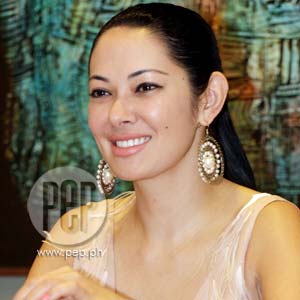 Ruffa Gutierrez indirectly answered the question about the report that her estranged husband, Turkish businessman Yilmaz Bektas, allegedly wants her back.

A national dailypublished today, April 20, the text messages Ruffa has been receiving from Yilmaz lately.

"I'm gonna get you back, Mrs. Bektas. I am not going to let you go! I started a life with you, will finish with you. You are my soulmate," Yilmaz allegedly texted Ruffa.

Ruffa explained this during the media junket prepared by TV5 for her appearance on 5-Star Specials this afternoon at Mario's restaurant on Tomas Morato, Quezon City.

"I never really show my message. But you know, parang you're challenging me and my credibility. So, I wanted him to know that what I'm saying is true. So, I showed him the text and na-challenge naman si Tito Ricky. At least nakita niya," said Ruffa to PEP (Philippine Entertainment Portal) and other members of the entertainment press.

The Paparazzi co-host admitted that she still has contact to the father of her daughters Lorin and Venice. However, she chose to talk about it in public.

Does this exchange of text messages mean it's possible for them to get back together?

"Kung na-realize niya to work things out because of the kids, because of the family, I think only time will tell. Kasi, we do have two kids and I haven't seen him. Malay mo kung hindi ko na siya type when I see him. Ang tagal na. I'll cross the bridge when I get there. Can I see him first?" Ruffa replied.

Ruffa said she once asked Yilmaz about this. However, she told the media, "He refuses to answer. Ayaw niya akong sagutin. Every time I tease him, hindi naman niya ako sinasagot. So, just let him be. Wala pang confirmation."

How would Ruffa feel if Yilmaz confirms this report?

Ruffa replied on a positive note, "You know, Yilmaz and I, we've moved on three years ago. And we've already filed the annulment so obviously we've moved on. When we first heard about the news, I was waiting for some strange pain to hit me or maglulupasay ako sa iyak or magalit ako. Pero hindi naman nangyari, I was fine. He wished me well with my life, which he never thought that he would be able to do. I wish them well also."