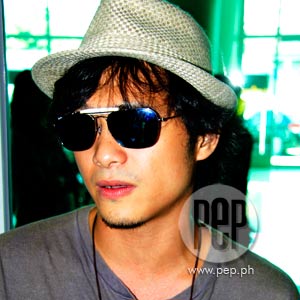 Rocker Kean Cipriano is still getting used to his new role as an actor. The young singer appears alongside Alex Gonzaga in TV5's teen program, BFGF.

"At first medyo awkward because it's a different field for me and I don't really do this. All my life, I've been rocking and rolling pero, yeah, it's a different experience. It's a fun experience really and ngayon nag-e-enjoy na 'ko kasi okay 'yong mga kasama ko sa trabaho," said Kean in a recent interview with PEP (Philippine Entertainment Portal) at KB Studios located along Marcos Highway.

Kean's unexpected foray into acting prompted some fans and observers to speculate that perhaps the Callalily frontman is thinking of striking out on his own for him to properly juggle a singing and acting career. Leaving one's band or group to pursue a solo undertaking is of course nothing new in the industry as proven in the past.

"I will never go solo," Kean quickly dismissed the rumor. He also stressed that his Callalily bandmates are with him regularly in the Sunday noontime musical-variety show P.O.5.

Callalily manager Darwin Hernandez supported Kean's claim by saying that the group was tapped by production to perform rock 'n' roll numbers every weekend to further spice up the new program.

STEADY STILL. Part of Kean's adjustment is learning how to deal with the long wait during tapings. One might think that being in a mainstream band should have made Kean prepared for some extended downtime. Rock bands are oftentimes asked to wait long hours while waiting for their turn during live gigs.

Another adjustment on Kean's part now that he's officially part of show business is how to deal with intrigues. Kean politely refused to directly answer our question concerning his reported bitter breakup with actress-singer Arci Muñoz and their strained post-separation status. He also opted to keep quiet about his rumored relationship with singer Rachelle Ann Go.

"Well, I really don't want to talk about it kasi napapagod na rin ako, puro ganun na lang. But personally, I guess steady lang ako with everything—with my music, with my bandmates, and with this new thing. Everything's falling into place for me. So, whatever happens, I'm sure I'm on the right path when it comes to love and my career," he said.