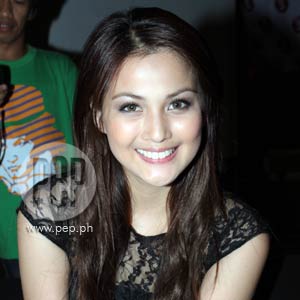 Dianne felt that the move had something to do with her decision to sign a non-exclusive contract with TV5 rather than renew ties with ABS-CBN's talent arm, Star Magic.

"They didn't tell me. Nalaman ko na lang through my group mates. Sabi nila, 'O, Dianne we have ganito, pero wala ka na.' I asked my handler about it and she told me 'Dianne, since you're no longer with Star Magic, you didn't sign up, so automatic out ka na,'" Dianne confided.

STRICT MEASURES. This wasn't the first time that Dianne experienced being pulled out unceremoniously from a project. Her stint in the comedy gag show Banana Split ended abruptly in 2008 when management decided to reformat the program and retain only a few of its original cast members.

But Dianne somehow felt that perhaps the network didn't like the fact that she was juggling two gag shows at the same time. During her Banana Split days, Dianne was also regularly seen in TV5's Lokomoko High.

Dianne couldn't help but notice the big shift when it comes to the policies being implemented by her former home network in allowing its stable of talents to work with rival companies.

Even GMA-7 maintains a cautious eye on the competition ever since the Novaliches-based station started launching an aggressive campaign to jolt the longstanding two-way network war.

Since she's no longer part of ASAP XV maybe she could join P.O.5 as one of the regulars. Another immediate concern for the mestiza actress is finding a new manager who could negotiate possible deals to further her career. Dianne's mother is currently representing her, though assuming the post full-time remains far- fetched for now.