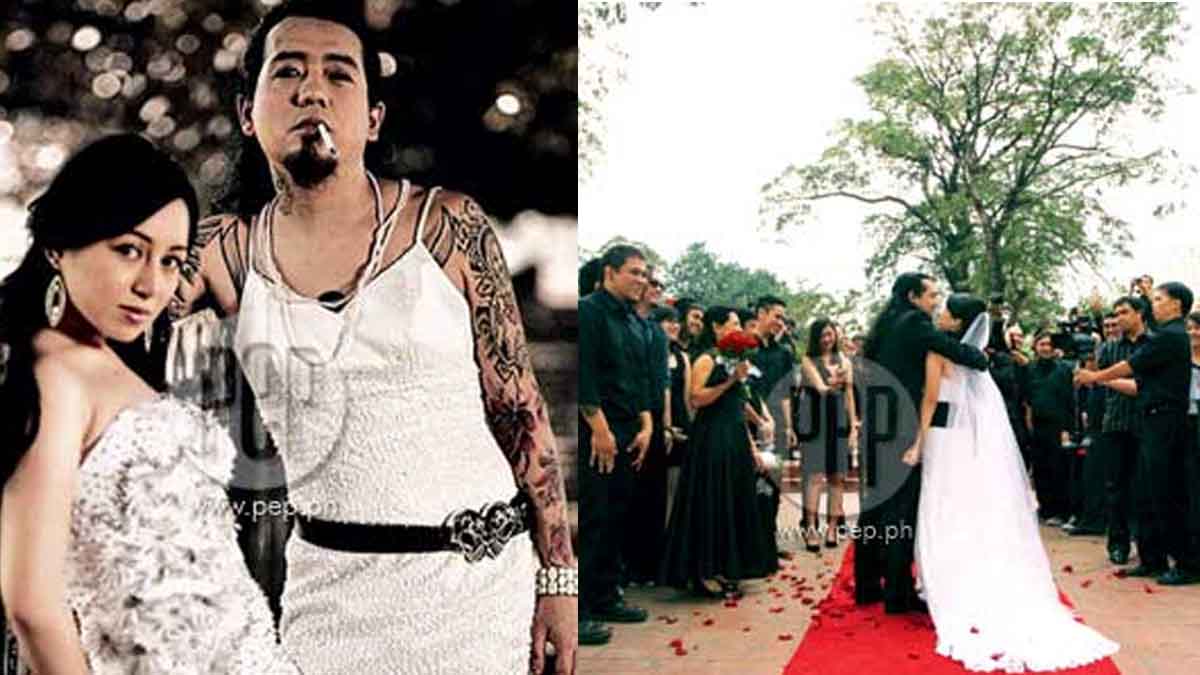 On January 27, 2009, rocker Jay Contreras and former child actress Sarah Abad surprised everybody when they defied tradition by having a wedding with a black-and-red color motif.

Photos of the offbeat affair at the St. Pancratius Chapel of Manila's Paco Park—along with prenuptial photos taken guerrilla style in a cemetery at the Clark Freeport Zone in Angeles City, Pampanga—quickly circulated on the Internet. The photos received mixed comments from bloggers who found them either "freakingly beautiful" or "very original."

Jay Contreras, 31, is the frontman of Kamikazee, the rock band credited with such hits as "Narda," "Seksi! Seksi!," and the remake of the Apo Hiking Society's "Doo Bidoo."

Sarah Abad, 22, appeared in such movies as Wanted: Perfect Father; Ika-11 Utos: Mahalin Mo, Asawa Mo; and Tunay na Magkaibigan, Walang Iwanan... Peksman, all made in 1994. The two met in 2002, when Sarah was a teenage girl of 16 and Jay was starting his music career at 24.

At that time, Jay had a lot on his mind, being a struggling rock musician whose band was putting together its first album, the self-titled Kamikazee.
Still, while leading separate lives, the two kept in touch. "Magkaibigan naman kasi kami even before naging kami," Sarah explains.

In the three years that followed the breakup, Jay had two other girlfriends, and Sarah had her own short-term relationships. "Pero nothing serious," she says. "Kasi, iba talaga company niya."

They got back together in 2005, the year before the release of Kamikazee's second album, Maharot, but soon found themselves facing a new problem: Jay got Sarah pregnant. And he didn't want to get tied down.

“Ang ganda ng love story namin, ano?” Jay cracks during the interview.
Though reluctant to get married, he was determined to stand by Sarah, who was then in college.

Sarah’s mild-mannered father had a hard time accepting the situation. He refused to speak to Jay.

It was only after the birth of Kidlat Caio—on August 24, 2006—that the rocker established a normal relationship with Sarah’s father.

Though unmarried, Jay and Sarah tried to create a normal family environment for Kidlat. Jay would visit his little family in the Abad home whenever he was free. The three of them would also attend the birthday parties of their friends’ children as a family.

“Noong una, wala talagang plano. As in, wala. Kumbaga, ako, for Kidlat lang.”Finally, around August last year, when Kidlat was about to turn a year old, Jay and Sarah sat down to discuss the matter—and decided to get married.