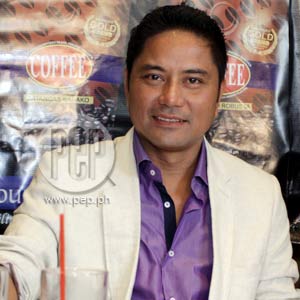 Being away from the Philippines for years, Hollywood director Ace Cruz was oblivious of the local movie scene. "It is only now that I'm getting updated," he says. "The only film I saw here was Brillante Mendoza's Kinatay. He [Brillante] invited me to go watch it at Glorietta in Makati City."

An ardent visitor of the picturesque island of Boracay, Ace recently told PEP (Philippine Entertainment Portal) how he enjoys casual sightseeing while churning out ideas for a project.

"I relax in Boracay," smiles Ace during a conversation at Harry's Bar in Taguig City. "I got a place over there and I like watching the sunset, enjoying the quality of life. But yeah, I'm constantly working—my mind, in my sleep, I'm thinking about ideas. When I wake up, I think about a script that I'm gonna put together."

Ace refuses, however, to acknowledge any kind of "you're such a hard worker" compliment, not even from close friends and colleagues.

STARTING YOUNG. Ace's fascination with directing started when he was just 13-years-old and he was inspired throughout his teenage years.

He fondly recalls imitating martial arts legend Bruce Lee and documenting his exploits on film together with "extras" composed mostly of family members.

"The very first film I did was a martial arts movie. I started when I was 13-years-old. I was videotaping my family and so I would actually shoot myself and then act like Bruce Lee, because I was into Bruce Lee when I was like 13, 14 years old," beams the Los Angeles-raised actor-director.

Studying drama at the University of Southern California (USC) exposed Ace to the world of acting and production work and honed his skills. By that time Ace was already determined to pursue both directing and acting as a career path.

It was while he was stage acting that veteran entertainment columnist and longtime talent manager Alfie Lorenzo spotted him.

"He said, 'Why don't you come to the Philippines and try it out as an actor?" Ace recalls.

That was a welcome opportunity for the young stage actor. He immediately packed his bags and flew to Manila to give film acting a try. Ace signed a contract with Viva Films and he was cast in action flicks from 1993 to 1996.

Ace's stint in local acting, though not memorable, motivated him enough to learn more about filmmaking.

Back in the States, Ace took up a three-year filmmaking course at the USC Film School.

Since his return to the U.S. in 1996, Ace has produced, directed and appeared in his own independent film projects like Gangstaz, Urban Task Force, Psychotic, Fate, and Desert of Death.

"People always ask me if it's hard mixing acting and directing at the same time, but to me it's not. Because I'm so used to [it]...that when I'm acting, I'm acting, when I'm directing, I'm directing, when I'm producing, I'm producing—I separate each role. And I trained my mind to be like that. I push my limits to say, 'Hey, how far can you go?' and it was never a big deal to me," he says.

Ace is a big fan of Madsen, whose acting career includes Thelma and Louise, Species, Free Willy, Die Another Day, Sin City, The Chronicles of Narnia, Scary Movie 4, Kill Bill, and many other movies.

"I love Michael," says Ace. "Him and I, we just clicked. He is very professional... You don't really direct an actor like that him. You just sort of say 'Hey, tone this down' or 'Make it a bit higher' because they developed their own character and character parts in their own way that works and you know that they're gonna deliver a great performance."

Outrage allowed the former Viva Films contract-actor to return as Ace the director, not just a balikbayan out for a good time. Connecting with local distributors to exhibit Outrage in the country, he has been flying back and forth between the States and Manila more often than in the past.

"I've been coming frequently recently because I think it's one avenue that I can promote my film. Because being a Filipino, I also wanna come back to my roots. Like what I've said, like how [Chinese film director and producer] John Woo went to China and became big, I want to do the same thing for the Philippines."

Ace candidly says that his goal transcends local boundaries. While he is open to the idea of working in Manila, he has is sights on the competitive global market.

"I haven't really focused on what type of movie is just for the Philippines. I always think, what type of movie do I have to make that the world market wants to buy. There are just certain formulas that you have to understand, the psychology of the masa dito, and that's not my audience. My audience is global and that's what I want to capture," explains Ace.

Ace feels that exposure and boldness to slug it out internationally are two important factors for Filipino artists to break out.

"I think that's what we should be doing. For anybody who has passion for filmmaking, to get notice, to go out there and make it happen so people would know your work. It's like going to war, and I really commend any filmmaker that has finished one movie and goes through all of it—from concept all the way to marketing a movie. I respect filmmakers like that because I know how tough it is."

Being known as an independent director has never been an issue for Ace. One has to pay his dues to be successful, as they say.

"I am surviving because of that. I'm able to keep continuing doing a movie because of the independent scene and that's why everyone has to start in independent [filmmaking] because the big studios are not going to give you a big movie if you haven't done anything. You have to work your way up for them to [give] notice, then they will say 'Hey, why don't you direct now a big movie?' That's what happened with Peter Jackson. He did low-budget movies before he became the director of Lord of the Rings. Clint Eastwood did low-budget, so everyone started in the independent," says Ace.

He's very upfront when it comes to the touchy subject of "selling out" to the establishment versus maintaining the purity of one's ideas minus the lure of financial security.

"There's a certain market, you know the business side has to kick in to understand, either make a movie, an art piece which only your family would appreciate and not make money. I make something because I want to keep surviving as a filmmaker. But I have to make movies that sell and that's gonna get the investors money back before I can make an art movie."

Despite all the challenges and disappointments, the appeal of a creative idea taking shape continues to fuel Ace's passion: "I want to make films that would at least mean something to the people. I think I'll be known as a filmmaker who made films with positive messages."