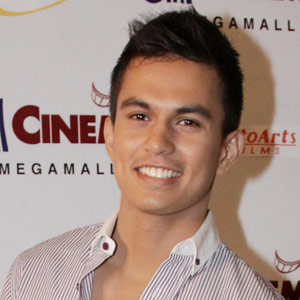 Before joining Pinoy Big Brother Double Up, Tom Rodriguez was a graphic designer by profession. The arts have continued to be his default activity, particularly during idle hours in between shoots.

"When I'm bored, I sketch on the set. When we were doing Here Comes The Bride, I'd sketch Angelica Panganiban and Tuesday Vargas. Now that we're doing Petrang Kabayo, I'd sketch Vice Ganda. Mostly now, I sketch my nieces and nephews in the States. I really miss them," says Tom.

This skill, Tom attests, translates across mediums—he can do environment, costume, weapon and character designs. "I can sketch any subject. It's just that now, in showbiz, all I see are faces so that's what I draw. I can do digital and I can do analog-acrylic, oils, water colors."

Aside from visual arts, this talented hunk also dabbles in writing. "I write a lot of music and poetry." His inspirations when it comes to modern poetry are John Mayer and Eric Clapton. "Their music is poetry in themselves. If you listen to it, read the lyrics, there's substance. Hidden meanings upon hidden meanings," he shares. He usually posts his work in his Facebook account.

MUAY THAI ENTHUSIAST. Aside from being a visual artist, Pinoy Big Brother Double Up ex-housemate Tom Rodriguez is also into different martial arts, among them Muay Thai.

"I was told not to be biased with one specific art. Because art, you can't encase, label or capture it. It has to be free-flowing," says Tom when asked about the kind of martial arts he focuses on.

Learning the skill both formally and by himself, Tom didn't focus on one specific martial art to earn a belt. "My teacher said that a belt is something which just holds your pants up. It means nothing. It's the hard work that means something and the knowledge you get from it.

MARTIAL ARTS FOR SELF-EXPRESSION. Growing up in the States, Tom had his share of campus bullies. The harassment he suffered even in elementary school, and later in high school, prompted him to learn martial arts. He narrates, "At first, it was more for self- defense. I wanted to kick everyone's ass before. But somewhere along the line, it became self-expression, a discipline."

Contrary to the perception that he tends to violence (once he punched a wall inside Big Brother's house), Tom says he practices martial arts only when it's clearly called for.