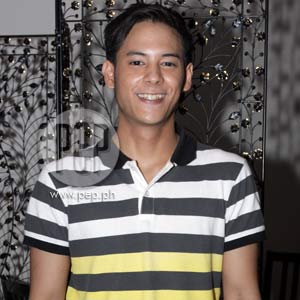 "That's his life, tanggapin ko na rin. That's something you're not supposed to get mad," says Felix Roco about the fact that his father, actor Bembol Roco, has a new family.

Felix Roco said that he has accepted the fact that his father, award-winning actor Bembol Roco, has another woman in his life. (CLICK HERE to read related article.)

The 21-year-old actor is now also open to the possibility that he might have a stepbrother or stepsister courtesy of his dad.

"Okay, that's his life, tanggapin ko na rin. That's something you're not supposed to get mad," he said.

Felix mentioned that he still communicates with his dad ever since he left their house.

Because of what happened to their family, Felix said that he and his twin brother Dominic became closer to their mom, Josefina, whose name is tattooed on Felix's left wrist.

"One true love ko 'yan," Felix said about his mom while showing us his tattoo. "Kasi, walang sumasama sa mom ko ngayon kaya kami ang nag-aalaga. That's why I'd rather stay at the house din."

NO TIME FOR LOVELIFE. On the other hand, Felix doesn't want to talk about his brother's rumored relationship with young actress Maxene Magalona. (CLICK HERE to read related article.)

However, he admitted that he and Dominic are really close to Maxene. "Ang alam ko, they're getting to know each other pa. Pero we're close din."

When asked if Dominic has introduced Maxene to their mom, he answered: "Actually, lumalabas na nga sila, e."

Does Felix, who claims that he's still single, get envious about his brother?

The Rosalka actor said no. Then, he stated, "I'd rather concentrate on work kasi masyadong bugbugan [ang mga scene]."

That explains why there's no romantic relationship between him and 17-year-old co-star Empress Schuck.

STAYS FOCUSED ON SHOWBIZ CAREER. Aside from his daily afternoon show Rosalka, Felix is also preparing for the annual Cosmopolitan Bachelor Bash.

Although he has done butt exposure in the indie film Sagrada Familia, the young star still feels uncomfortable taking off his shirt in public.

Felix also said that, for the meantime, he might not accept offers that would require him to do sexy scenes.

Also because of his busy schedule, Felix already declined some indie projects.

He's hoping though that he'd become one of the endorsers of a major clothing brand, which currently supplies some of his wardrobe.