Kapamilya Karavan will head to Bicol on September 21 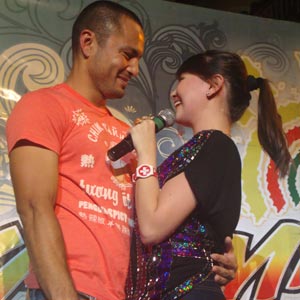 Lovebirds Derek Ramsay and Angelica Panganiban raised the kilig meter of Davaoeños that trooped to the Gaisano Mall to celebrate Kadayawan 2010, which was held from August 16 to 22.

To add more zest to the country's colorful festivals, ABS-CBN Regional Network Group (RNG) brings in Kapamilya Karavan, which which will gather some of the popular Kapamilya stars to perform for their fans.

Last month, Kadayawan Festival in the Gaisano Mall of Davao, was graced by no less than real-life sweethearts Angelica Panganiban and Derek Ramsay.


To their fans' delight, Angelica sang for Derek and ended it with the message, "Salamat sa proteksiyon, suporta, pagtatanggol at pagmamahal." Derek responded with, "Hindi kita iiwan."

Last August 26, Kapamilya Karavan flew to Cagayan de Oro for the Kagay-An Festival, where two male fans had the rare chance of sharing the stage with Precious Hearts Romances Impostor star Maja Salvador, who allowed the guys to kiss her on the cheek and even hold her hand. She brought the house down with her dance moves and, of course, her charm!

But one lady, who's a big fan of Hector in the series Rubi, got even luckier! Among the throng of ladies that gathered at the venue, she was chosen by the actor that portrays her fave character, Diether Ocampo. Her priceless reaction—she cried and hugged her idol!

Bam, the resident talent of ABS-CBN RNG and child crooner Rolando Ng III, semi-finalist of Pilipinas Got Talent, also wowed the audience with their powerful voices.

Dennis Padilla, ABS-CBN RNG's resident host, with local hosts Bernie Bitok Bitok, Lala Morena and Sweet Maricar of MOR 91.9, plus, Rovic Cuasito of Kapamilya Winner Ka, made sure that the 5,000 people that trooped to the SM CDO Parking enjoyed the show despite the rain.