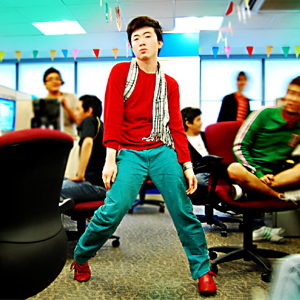 Bern Josep Persia, a.k.a. Bekimon, appeared as a guest in the TV shows Full Time Moms and Quick Fire. He had been featured as well in Umagang Kay Ganda, 24 Oras, Rated K, The Sweet Life, and other news programs. After making several guest appearances on TV, Bekimon signed up with this writer, who also manages the Chris Cahilig Consultancy—a PR, advertising, talent services, and viral marketin

Just when the public was getting used to the Jejemon lingo, a new YouTube sensation began to emerge—Bekimon.

The cyberstar has reached nearly a million page views through his 40 plus video clips uploaded on the Internet for the past two months. Not content with simply inventing strange word-spellings like the Jejemon, Bekimon entertains viewers with hardcore gayspeak and delightful gags.

"Bekimon" refers to both the Internet video star Bekimon himself, and his strange and entertaining use of gay lingo. Bekimon language can be difficult to understand but somehow he manages to tickle everyone's funny bone, even if they're not fluent in gayspeak.

Today, Bekimon has become a gay comedy icon similar to characters like Dolphy's Facifica Falayfay and the ones played by Roderick Paulate.

In his videos, Bekimon plays three characters: a) Mudak Bekimon; b) Lolabells; and c) Baby Bekimon—all fluent speakers of the Bekimon language. They use words such as "jowa" (meaning girlfriend/boyfriend), "wititit" (no or will not), and "noselift" (I know), among others.

Bekimon's plots are usually about mundane activities made funny by his characters speaking gay lingo. One of his most popular videos shows Mudak Bekimon, a mother, washing the dishes while scolding her "junakis" or anak (child). He even made a State of the Nation Address (SONA) video as the self-proclaimed president of the Bekimon Republic.

When asked about where he gets his motivation to come up with such funny topics, he answered: The feedback of his audiences.

He tells PEP (Philippine Enetrtainment Portal), "It feels good to know that I can make them laugh. Some of them are mothers, kids, and OFWs who enjoy watching my videos. Life nowadays can get very difficult and stressful. So being an instrument for making others happy, even for a short while, is an honor."

And how does he feel now that Beckimon has become another internet sensation?

"I guess I was born to be an entertainer. I've always wanted to make people happy, using my God-given talents. I feel as if like God is preparing me to do something big. Discovering my strengths and talents was a pivotal moment for me," says Bekimon.

WANT A SAMPLER? One of the most viewed clips is titled "Mudak Bekimon's Excuse Letter for Junakis-Dear Teacheraka." Bern Josep assumes the role of Mudak (which means "mother" in Bekimon language), who gives this message to her son's teacher:

If you're not familiar with gay lingo, the letter translates as:

"Dear teacher, How are you? Are you okay? I would like to tell you that my son will not be able to go to school today."