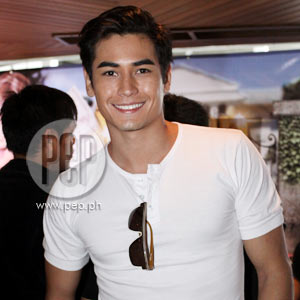 Fabio Ide on staying in the Philippines for good: "I've been to different places pero dito, I don't know...Sobrang gusto ko dito kasi, yung mga tao sobrang mabait. Yung the vibe of the place, you know, like it's a 'third-world' country...."

SHOWBIZ PROJECTS. The hunk is taking his craft seriously, and will not merely treat it as his means to earn a living. The model turned actor wants to make it his life.

He beamed, "I am now busy with two projects—Comedy Bar and Ang Yaman ni Lola."

When asked to elaborate on his role for the latter, he related, "Ako ay karpintero, tubero, basurero, all around na trabaho. Pero, ah, it's like I'm the hunk of the house, and I always have to help the Lola, who's the billionaire."

Fabio obviously liked talking about his job because he went on revealing the show's storyline.

"She has a lot of money, so her son-in-law and her daughter will try to steal her money, so me and the other, Patricia, she is the mayordoma, we are the one who will help Lola to take care of her money and also to take care of the house.

"Pero it's like a soap opera pero at the same time a sitcom kasi, we have also a challenge, and we give...Lola gives 100,000 pesos every week to the winner of the challenge. Kasi minsan kailangan siya sa makeup artist, o, so parang they...a lot of challenge then who's the winner, they give 100,000 every week."

But comedy, according to this fast-rising star, will just be his launch pad.

The Kapuso newbie continued, "Pero now, I'm really accepting this opportunity that I'm having right now as an artista to learn more, to learn the language, to learn the industry work.

But he's very happy with his place at present because it makes him work and enjoy at the same time.

He said, "Even me, I didn't know that [comedy] would be so nice and people would love it. I've been here like six months and I already have two shows for comedy. So that's why I was so overwhelmed. I was like sobrang masaya ako."

If he's able to raise his current status to being a leading man, he wants to work with "Iza Calzado!"

He said, "I heard a lot of good things about her as an artist, as a person...I've met her a couple of time-in the GMA anniversary, on their shows, in Party Pilipinas, so she's really smart.

"I can say very mabait and very talented. So I think right now, for the sake that I'm starting to do a lot of ah...shows...I shoot two movies already too, so I think, for me right now, I would be really glad, really happy to have a role with her, like to work with her."

Fabio also mentioned that during his first trip to Manila in 2006, "I was able to work with her for a commercial for Enervon vitamins. I dunno if you guys remember, I have to say, 'Akala ko peke.'"

LIFE BEFORE SHOWBIZ. Yes, just like fellow Brapanese Akihiro Sato and Daniel Matsunaga, Fabio was also plucked out of the world of modeling.

He recalled how he was discovered by a modeling agency in Brazil because of his sisters seven years ago:

"They were invited. Some people brought her, ah...met her in the shopping center and say, 'Hey you are so pretty. You wanna be a model?' And [she] said 'okay.'

"So my two sisters went first to this modeling agency in Brazil right, after that, they mentioned me to the owner of the agency, 'Hey, I have a brother. He's also good-looking. Maybe he could come here.'

"And then, they accept me, and then, I went there, and then, I made my portfolio. All of a sudden, it started working really well. So I was like doing, ah...I was studying and doing modeling at the same time back in Brazil."

Fabio had two more years before graduating with a Marketing Publicity degree in Sãu Paolo when he decided to go full-time as a model.

"After like one, two months since I started modeling, I was invited to travel internationally, and because I love traveling, I love exploring, I accept it. I've been in twelve countries, and here, I have been...five times already, as a model. "

It was four years ago when he first stepped on the Philippine soil. That was the same year Akihiro Sato became one of the Cosmopolitan magazine's ten celebrity centerfolds. If he pursued a showbiz career then, he could have been a bigger star now. But he left after finishing his assignments.

"Why? Kasi by the time, I want to model and I still wanted to travel around the world. I wanna explore, I wanna go to different places...I would have, I think, but I'm not prepared yet to accept the opportunity," he said, explaining his decision of not staying long.

He also underlined the fact that he would never think of Akihiro and Daniel Matsunaga as his rivals.

"I wouldn't say I would have been more popular than they. When I was here in 2006, I was just doing modeling. I didn't plan to [join] showbiz or to stay here longer. Dani and Aki are very good friends of mine. I'm not worried to be more popular than them. They have been here almost two years, [while] I have been here in six months. I'm already happy of what I have and I think, slowly, I will get there," he said with much optimism.

LOVING THE PHILIPPINES. Does he follow a timeline in achieving his career goals?

He answered "not really," but one thing he's sure about—he loves it here.

"I lived in Japan, for a long time. It was a really good place for me as well. My career was really good. I had a really good contract with a magazine there. Pero, the feeling I had that even making good money, I didn't have that, you know that? Ah, that happiness inside you...

"And here, of course you can't compare to the first-world countries, di ba? Pero that happiness inside you, you know, like when you wake up everyday, you're happy to be here. You live happy, you work happy, so everything flows."

"I think Philippines is very similar to Brazil. People struggle to survive but there's always a positive vibe, you know, like this happy smile in the Filipino face and everybody is so hospitable, so friendly. I love the food, I love the weather. I don't know...I felt at home here, you know. Yeah, compared to among the countries I've traveled, here is definitely the place where I really felt at home—like, sobrang pareho sa Brazil."

How about his family?

"I am planning to go back to Brazil in December kasi I haven't seen them in almost two years, di ba? So, sobrang mahaba, so...and hopefully, they could come here in February to visit me," Fabio told PEP.

There was a smile on his face as he began talking about his parents. He said they've given him and his sisters the freedom to pursue whatever makes them happy.

"My parents, they really support me. Thank God, I have a really beautiful family! My father is a dentist back in Brazil. My mother works for Marketing.

"They put me and my sisters in the world, and they...how do I say that? They took care of us very well. They taught us very well, you know, like...so now, we are ready to the life. And as long as everything we are doing right now makes us happy, then they're gonna be happy as well. So they really support me and they're really happy with my career.

"That's why they wanna come here to see why, why did I fall in love so badly in this country, why even my sister now, yung kapatid ko, nakatira dito."

NEXT LEVEL OF HIS CAREER. Aside from learning to assimilate the language and culture, Fabio has also prepared himself for the controversial side of showbiz.

"I've heard a lot of things. It's normal now in our lives. People will talk about it. Some stuffs may be true, some stuffs, not true. Pero I don't know, I always try to be myself. I always...I'm always nice to people. I hate gossips. I hate talking bad things..." the 23-year-old budding actor said.

And how is he planning to defend himself against intrigues?

"There are many things that we see around, but I'm the kind of guy that I wouldn't say anything. I just keep it to myself. So I always try to be far from intrigues, pero if it happens, I will just say, 'What this issue is all about?' And then, I'll just try to explain or I don't know, pero I'm not really worried about intrigues. I just try to be a nice guy, and hopefully, I won't have so many intrigues."

On a parting note, he again mentioned his next move:

"I've been growing old [sic]. I've been traveling a lot. This time, I'm ready to go to the next level of my career. I'm ready to do something different than just modeling," Fabio said, and he's definitely not joking.