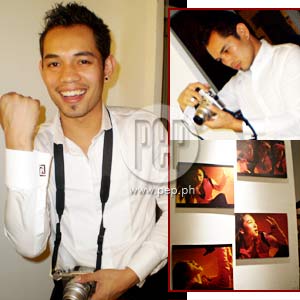 WBA World Superflyweight interim champion Nonito Donaire has hung up his boxing gloves, but only for a while, to practice a hobby he's quite vocal about—photography.

Nonito invited PEP (Philippine Entertainment Portal) to his first photography exhibit together with other students under the tutelage of photographer Niccolo Cosme last September 4 at The Lighthouse Studio in Malate, Manila.

"We have a lot of themes, some people did ice, rain, or whatever it is. Mine was heat. It was my way of expressing how I feel... It's almost time for me to go back to training, so for me to do it, I asked Rachel (Donaire, his wife) to bring out how an athlete feels," said Nonito about the concept of his work.

He went on to describe each of the four pictures.

"The heat is an overwhelming heat (left top side of the four pictures). You can see in her eyes, sweat actually falling off her face. With the way of light, parang mainit talaga siya (right bottom).

"And over here (right top), you can see in her face parang she wants to give up, it's too hard for her, it's like her determination to keep on going. And, of course, the thirst for water because it is so hot (left bottom).

"This is my concept to express my way when I'm training. That is actually how I feel," the 28-year-old boxing champ revealed.

Nonito uses a Canon 70 camera for that particular indoor shoot. He combined two lights with a red filter to achieve a sunlight effect.

The shoot and the preparations were all done in an hour. Even with time constraint, Nonito said he found it easy.

"Kasi, yung mga photos ko, my expression, the way...I feel. This is one of the self-expressions that I had...the sense of training, the sense of heat. The sense of somehow giving up something I had to push through," he explained.

Aside from the photography, he was also hands-on on the styling.

"I told her (Rachel) to bring the clothes. I picked the clothing. I picked everything. It was an art because we wanted it to be realistic, so this is what she wears in her training. This is what I choose for her to wear."

As always, Nonito shared the success of the photos with his wife.

"Mas easy sa akin kasi for her, you know, she already knows how to be an athlete. Athlete siya, e," he said. (Rachel is a U.S. collegiate and military taekwondo champion.)

ARTISTIC SELF-EXPRESSION. Nonito revealed that aside from being an athlete, he is very much in touch with his artistic side.

"I've always been into self-expression. From sketching to painting to video, doing film and then... I pick out the theme for the film then I started shooting and it was very relaxing. It was very amazing. Then, I would go and hike in the hills or little mountains in California and I would take photos," he recounted.

Does he have a particular kind of photography in mind?

"I specialize in self-expression... meaning it can be anything."

Giving concrete examples, he said, "It can be a baby, it can be a cat on the street, it can be a boy in a butas na butas na shirt. You know, it can be something like that. It is a matter of what inspired me to take that photo. And when I can say that it can inspire other people."

As a boxer, he's proud to say that he has covered three boxing events already, not with his boxing gloves, but with his camera.

But what really triggered his interest for photography?

For all his photographer's passion, Nonito confessed that he never took up formal studies.

"Actually, I never studied photography. I just grabbed a camera and started playing with it," he said.

Asked about his next fight, he replied, "They're telling me November. Some people are saying December. But one thing is for sure, I gotta to get ready for those two dates just in case I do have a fight.

"I'll make sure to bring my camera with me," he added.

RACHEL AS HIS MODEL. For the exhibit, Rachel served as Nonito's model.

"Rachel is my No. 1 model!" he exclaimed. "That's (pointing to Rachel's photos) my number one. If you read our blog, our Facebook, that's my number one. I guess anybody knows that the photos I take...that I am taking are ways to inspire me or ways that I see beauty.

"She supports me 100 percent. In fact, she inspired me, she wants me to do it, to be more expressive, to express myself more. She has always been there for me."

How does he drive away the ladies then?

Without blinking, he answered, "I think Rachel drives them away from me. Nakikita na, e, parang mataray na siya. So, takot sila sa kanya. She's always with me."

He continued, "When she's not with me, she knows that I'm always nice to people. But I always say that I'm married.

Then, swift as his punches, he turned serious from the frivolous mood.

"I mean, when Rachel's not there, you know...it's hardly that she's not there. I'm always... I love being with her. I would always take her with me.

"I mean, when I was in Japan, we went together. When I went to Puerto Rico, we went together. You know, parang mahirap for me to move on my own, e. It's like nasanay ako na nandun siya palagi sa gilid ko. And I think it's good for me because that way, she helps me out and supports me, you know. When I need her, she's there. "

After a long pause, he continued, "But if she's not there, actually, I don't go out. Nasa room lang ako."

As if to prove that claim, Nonito narrated, "Actually, I remember when I was in Cebu, we spent like so much money, like two to three thousand dollars on phone calls. We keep calling back each other. And I was pretty much staying at the house...watch TV."

Turning to Rachel in sudden realization, he exclaimed, "God! Im so behaved. Oh, my god, I didn't even think about that. I'm so behaved.

"You trained me well, Rachel," Nonito said to Rachel, patting her on the back. She smiled in affirmation.