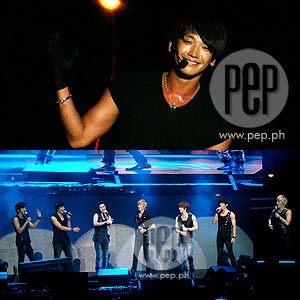 Although the concert was scheduled to start at 8:00 p.m., the grounds started filling up as early as 6:00 p.m.

Rain was in the Philippines for this concert and to shoot a Koreanovela. He was on stage for less than an hour performing nine songs that thrilled fans and left the audience feeling appreciative and satisfied.

Opening the concert was Christian Bautista and Korean male group U-Kiss while radio and TV host KC Montero was the event's emcee.

The concert started at 8:30 p.m. Christian sang three numbers: One Way's "Wrong Number," Jose Mari Chan's "Beautiful Girl," and his signature "The Way You Look at Me."

Girls in the audience screamed when U-Kiss started their gig: One member danced like a girl to Miss A's song "Bad Girl Good Girl" while other members imitated Rain's dance moves.

The group also performed an acoustic rendition of Boyz II Men's "End of the Road." Several members struggled with the song as not all were fluent in English.

RAINISM. Rain opened the concert with "It's Raining." Fans couldn't peel their eyes away from the stage as their idol sang and performed his unique dance moves.

While performing "It's Raining" and "Touch Ya," videos of heavy rain and pop art were shown.

Rain spoke in Korean during the concert but the audience didn't seem to mind. Video screens showed his popular music videos, which included "I Do," "Love Song," "Love Story," and "Ways to Avoid the Sun."

Rain changed costume twice. He wore outfits that called attention to his toned, hot bod which fans couldn't seem to get enough of. They screamed for him to show his six-pack. "Take it off!" they pleaded.

Rain obliged by flashing his abs a few times. He's such a tease!

The concert ended at 10:15 p.m. After he sang "Rainism," "Hip Song," and "Instead of Saying Goodbye," he said a quick "thank you" to the audience and left the stage.

Although calls for an encore were not answered, the Intensity concert did not disappoint. Indeed, it was a night to be remembered.