NEWBIE: Benedict Campos sets aside dream of becoming a lawyer to assume the role of Prince Charming 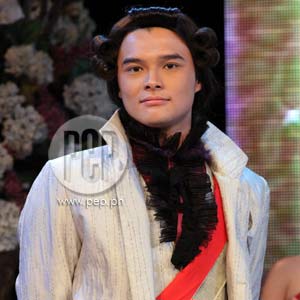 After graduating with a degree in political science, showbiz newcomer Benedict Campos decided he was going to be an actor.

Benedict, the son of a businessman and a homemaker, caught the acting bug in college, when he appeared in a number of television commercials.

He had enjoyed the gig so much he thought of joining show business and abandoning his dream of becoming a lawyer.

His parents did not approve. After a long argument, they arrived at a compromise: Finish college and then he can join showbiz.

So Benedict dutifully attended school and prayed his parents would keep their promise.

CLINCHING PRINCE CHARMING. The moment he got his diploma, Benedict became an actor. Then everything started happening fast. He met Betchay Nakpil, who agreed to become his official manager together with GMA-7's Artist Center.

The network was holding auditions for its newest primetime series, Grazilda. Benedict tried his luck and landed the coveted role of Cinderella's Prince Charming.

"When I auditioned for the role, ang dami po namin," recalled Benedict in a conversation with PEP (Philippine Entertainment Portal) at Studio 5 of the GMA Network Center in Quezon City last September 7.

Benedict, a member of the varsity swim team from high school to college, said he would have been happy just to be in the cast.

He couldn't believe he actually landed a major role.

The role of Prince Charming doesn't require a lot of preparation, confessed Benedict. The real challenge lies in wearing those elaborative costumes and learning how to ride a horse in record time.

Benedict admitted that he has no intention of becoming a lawyer—even in the future. His parents seem happy with his decision. Their son finished college and that's enough for mom and dad.