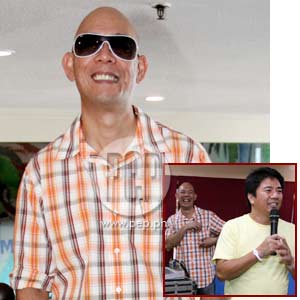 Friends for over 10 years now, Jay Montelibano has seen the other side of Willie Revillame.

When MTB was axed, it was replaced by the controversial variety show Wowowee, which was primarily hosted by Willie; Montelibano remained its business unit head.

He held the same position during the first week of Pilipinas Win na Win, which had replaced Wowowee five years later.

The incredibly successful game show was taken off the air 15 weeks after Willie filed an "indefinite leave" due to a heated word war between him and fellow Kapamilya talent Jobert Sucaldito.

After the pilot week of Pilipinas Win na Win, Montelibano decided to quit. His reasons, he was quick to clarify, "were personal, not because of my [financial problems]," he said. "My uncle was already helping me out."

He said he had properly informed his immediate supervisor at ABS-CBN.

Montelibano recounted, "I told Linggit [Tan, head of TV production] that I was resigning the week before [Willie] rescinded his contract. I told Linggit that as much as I wanted to continue, my uncle was helping me with my debts, loans, and finances, and was willing to take me in. She allowed me naman. The following week, I filed my resignation."

He stressed that he had already resigned from ABS-CBN, even before Willie rescinded his contract with the network. (CLICK HERE to read related article.)

"Direk [Edgar] 'Bobot' Mortiz, who has always in touch with Willie, was the one who informed Willie that I had resigned. In fact, on the day he rescinded his contract...he got in touch with a handful of us who are really close to him. We got together at Dinelli Lounge at Hotel Rembrandt [on Tomas Morato, Quezon City]. I didn't stay long, I just said hi and wished him well.

"He asked me why I resigned. I said because of personal reasons. He told me to keep in touch. The next time we spoke, he told me about his plans. I was offered to join him. Was I interested? I said, 'Sure why not?'"

At that time, Montelibano said he had no idea what kind of show Willie had in mind and if a network was even involved.

"His plan was he was building his own company. When I was informed, wala pa siyang show.

"But after he rescinded his contract, 'tapos I resigned from ABS-CBN, everybody thought I was joining him.

"It was like 'damn if you do, damn if you don't.' Whether I join or not, everybody would still think I was joining Willie," he said.

GOOD WORDS ABOUT WILLIE. Montelibano said he never had second thoughts about joining Willie on his new venture on TV5.

"Hindi naman siya mahirap pakisamahan," he said. "You just have to really understand him. Others usually misconstrue his words and actions."

He clarified while trying the dispel the usual impression people have about Willie—that he's "mayabang."

Montelibano said he understands why the public perceives Willie as someone who always loses control of his emotions on camera.

"He has a good heart," he said. "It is difficult for others to understand him because they don't know him."

Willie had objected, on air, to the insertion of a video of former President Corazon Aquino's cortege on Wowowee.

"Ito lang ang ibig niyang sabihin: 'Okay lang, we can give way. We will not have Wowowee today and let the people mourn.' Pero the way he said it, it was misconstrued," Montelibano said.

PLANS FOR WILLING WILLIE. As the business unit head of Willing Willie, Montelibano said, "I'll be in charge of the finances, logistics, operation, the setting up and mounting of the whole production, not only for Willing Willie because eventually, there would be other shows and other projects."

What are the plans for the new show?

"Well, it's a variety show capitalizing on [Willie's] strengths. Aside from hosting, he has the ability to touch people's hearts, [especially] during the interview portion that used to be 'Willie of Fortune.' Strength niya 'yon, e.

"When he interviews people, they automatically open up to him. Sometimes papunta pa lang sila ng podium, hindi pa nga napapakilala ang sarili nila, umiiyak na. They look up to him as a father figure. That's really touching."

Montelibano admitted that Willie's new variety show on TV5 could be similar to Wowowee.

He explained, "Kasi sa variety naman no one can really claim na, 'Ako lang 'to.' Variety shows have come and gone. Eat Bulaga itself is a variety show.

"I guess, what cannot be replicated, in relation to Willie, is his style and manner of hosting. In all my years on TV, even before MTB—kung saan una kaming nagkasama ni Willie—I have never seen anyone who has the same flair and style of hosting as Willie.

"'Yong kanyang spontaneity is different. The way he talks to people is also different. He talks to them in their language kaya siguro naa-appreciate siya ng mga tao."

Montelibano said their new mother network, where they inked a five-year contract, is giving them full support.

"TV5 naman is very supportive, e. We have out-of-home advertisements, meaning, other programs of TV5 will help promote [the show], as well as radio programs and press releases."

He is confident that soon they will be able to hold shows abroad like they used to do on Wowowee.

"Overall kasi, I know where TV5 is headed, e. Soon, they will also have their own Filipino channel abroad. Well, sabi ko nga, if you're funded by someone like MVP [Manny V. Pangilinan, TV5 chairman], anything is possible. I'm sure this has been their direction from Day 1 when they acquired TV5.

"Ito ay napa-aga lang. We know of people who have unsubscribed from TFC (The Filipino Channel of ABS-CBN) because they know na kinansel na ang Wowowee. We aim to target Filipinos abroad. So there will also be shows abroad."