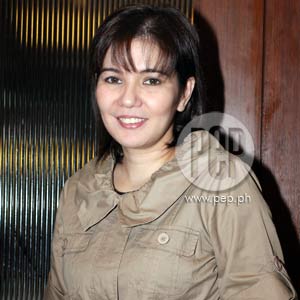 Jumping into marriage was a "'major, major' lesson learned" for Face to Face host, Amy Perez.

Amy exchanged "I do's" with singer and ex-South Border vocalist Brix Ferraris several years back, only to part ways because of growing differences.

The Supreme Court, in a July 17, 2006 resolution, denied Amy's petition to declare the marriage null and void on the basis of "psychological incapacity."

It may be easy to brand the marriage as a "mistake," but Amy feels it's not fair to describe her past experience callously .

The 41-year-old host was referring to her son with Brix named Adi. Both Amy and Adi have been estranged from the singer for years but she encourages her son to communicate with his father through Internet social networking sites.

Meeting Carlo, said Amy, made her rediscover the wonders of life and love.

"The separation [with Brix] was very tough," confessed Amy. "But one has to move on, especially since may anak ako and I have to provide and make sure that my child grows in a loving environment."

Fortunately, Carlo entered the picture and was able to fill in the space vacated by Brix as a father. Domestic bliss made Amy consider "showbiz retirement" to live a quiet life with her family.

Fate, however, had other plans and Amy received an offer from rejuvenated network TV5 to host a new show they were conceptualizing earlier this year. That show turned out to be the country's first "talak-serye" titled Face to Face.

The show was launched on March 22, 2010. It didn't take long before viewership started catching up, making Face to Face a legitimate force in the ratings game both in the morning and late evening timeslots.

Being caught in the middle of a heated argument between warring parties is not exactly a glamorous occupation, but someone has to do the job, as they say. When it comes to counseling, Amy leaves that to the Trio-Tagapayo composed of a spiritual adviser, lawyer, and psychologist.

LIFE BEGINS ANEW. The courage to learn and carry on from past errors certainly tailor-fits Amy to host the highly emotional program. Hosting a radio program for five years also shaped Amy to become a good listener.

There's just no room anymore for bitterness and one must not constantly rekindle past wounds, added Amy. "Itong the past years ng buhay ko, siguro the past four, second chance in love, second chance in life, second chance in career. So, masuwerte pa rin ako because madami pang panahon para baguhin at ayusin 'yong dapat ayusin—to value and really love the people around habang buhay ako."