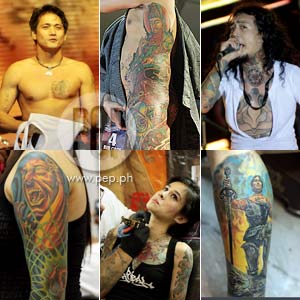 Dutdutan 2010, dubbed A Decade of Ink, convened tattoo lovers and celebrities for an entire day of art and self-expression. This year's event was staged at the World Trade Center in Pasay City and was attended even by foreign skin art enthusiasts.

The country's annual tattoo festival branded as Dutdutan continues to grow even stronger as "skin art" becomes increasingly accepted and fashionable to a wide mainstream market.

Nowadays, tattoos are accepted as an art form and outlet for self-expression, not limited to rock n' roll musicians, artists, and even people with questionable character. Modern media has of course played a huge part in this revolution, carrying cable programs like Miami Ink and LA Ink, to promote the practice.

This surge in popularity was evident even here in our country as witnessed last September 25 at the World Trade Center in Pasay City.

Dutdutan X: A Decade of Artistic Ink gathered anew local and foreign tattoo artists, enthusiasts, and curious spectators under one roof to celebrate the centuries-old art. More than simply laying ink on one's skin, the event's purpose is to highlight artistry, skill, and the ingenuity of artists

This year's affair featured the expected highlights—on-the-spot tattooing and the handing out of the "Tattoo of the Day" award. Adding more excitement were sidelights like the drum duel contest, hardcore URCC (Universal Reality Combat Championship) action, body piercing contest, bikini contest, and of course, the rock concert graced by mainstream and underground acts.

It was a tough and long night for all four judges as this year's batch featured impressive art designs crafted painstakingly by participating tattooists. The designs exhibited this year meandered from the simple to the most outrageous. Some contestants even became human canvases, allowing almost their entire body to be inked with colorful detailed images.

Dutdutan would not be complete, of course, without rock acts providing good music to complement all the happenings going on. Rock bands Franco, Imago, Sandwich, Pedicab, Kamikazee, Valley of Chrome, along with favorite novelty old timer Grin Department, all dished out blasting tunes to keep the energy level of everyone in attendance swinging.

"Essentially, Dutdutan as an event initiates the evolution and elevation of tattoo as an art form—one of the many ways of self-expression that has long been regarded as taboo, as it always appealed to the rebel crowd and the unconventional. But now, tattoos are considered to be a mainstream art, as more celebrities started having them. Famous personalities, not just the obscure, were not only getting tattoos, but were displaying them proudly. Suddenly, the status of body art had dramatically improved and its stigma was fading fast," the event's official website trumpeted.

The big turnout of people in this year's installment of the tattoo convention-festival clearly drove that point home—living up to the event's objective of promoting self-expression regardless of age and social status.