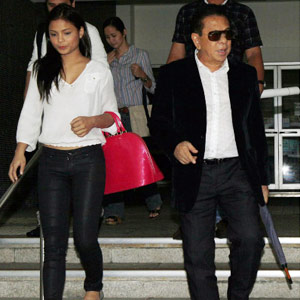 "This is who I am. I am this kind of person and I am this kind of friend. He did something, I will tell you, but I will be right by your side to support you. This is who I am and ganito akong klaseng kaibigan," says Lovi Poe about attending the arraignment of rumored boyfriend Representative Ronald Singson. (In this photo, Lovi is seen with Ilocos Sur Governor Chavit Singson leaving the Tuen Wan law court in Hong Kong after Ronald's arraignment.)

Lovi Poe has been cornered and cannot escape—an interview, that is.

The recent (and controversial) news attaching itself lately to the young actress-singer has made Lovi the favorite target of write-ups. With Showbiz Central's "Don't Lie to Me" segment, it was time to set the record straight.

With showbiz interrogator John "Sweet" Lapus, the rules are simple: Strapped in a lie detector machine, Lovi will answer only "Yes" or "No." She must explain herself if she's caught lying. As entertainment, for every "Lie" result John will perform a short (and deadly) dance number for everyone.

Confident about these simple rules, Lovi settled herself on the comfortable chair attaching her to the machine. Her relaxed smile even turned into a grin when she heard the first question.

The bewildered look on Lovi's face transformed into a smile after she saw Sweet's cool dance moves. Without breaking a sweat and sparing not a pause in breath, Sweet walked up to Lovi and asked, "Ano ba pagkakaalam mo? Tatlong linggo nang walang prod number ang Glam Girls?"

"Well, actually, I don't really know kung tapos na ang Glam Girls thing namin," admitted Lovi. "Wala pa naman sinasabi sa amin. Unless they give us a notice, that's when I can say na it is true. I think they are having a hard time with our schedules."

Can she say that there's a rift between Heart and Bianca?

MARK ANTHONY. The next question was about her and Mark Anthony Fernandez. Rumor has it that she was chosen by Mark to appear with him in Lovebug. However, Lovi supposedly got nervous about appearing with Mark and she backed out of the show. Is it true?

For the second time around, Lovi got free dance entertainment from Sweet. And the now-visibly tired Sweet playfully demanded an explanation for his "trouble."

After the smile disappeared from her face, Lovi answered, "Yes, actually. We are doing Lovebug together. Hindi ako nag-backout."

Before the result came out, Sweet made a big show of prepping up for another dance because he got the feeling it was going to be another lie.

Indeed, it was a LIE!

"Aaminin ko na we're really close now," said Lovi. "We enjoy each other's company already. But then, I don't know if he is, and I don't want to confirm this."

"Actually, it is very hard to answer that right now because the first thing is that I don't think about it that much," said Lovi. "But then for me, hopefully maliwanagan na ang lahat ng tao sa totoong pangyayari, which I can't elaborate right now and he can't elaborate also right now. It's ongoing kasi."

So what's her message to Ronald?

"Well, he already knows that I'll always be there to support him," answered Lovi.