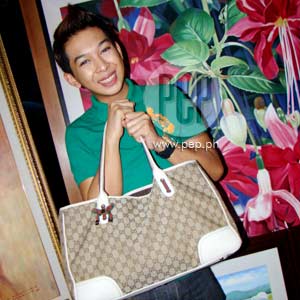 IC Mendoza happily follows the footsteps of his late grandmother Lourdes "Inday Badiday" Carvajal and his mom Dolly Anne Carvajal, who are both known as entertainment journalists.

At first, the young host of TV5's daily entertainment show Juicy! did not think that he could host the program. But after earning praise from friends and viewers IC decided to keep his job, which he now enjoys.

"May future pala ako [sa showbiz]. Nakakatuwa siya," he told PEP in an interview with him during the media junket prepared for Juicy! hosts recently.

IC's grandmother was dubbed the Queen of Showbiz Intrigues during her time. She hosted several entertainment shows: Nothing But the Truth, Would You Believe, See-True, Eye-to-Eye, and Inday, Heart to Heart.

After Ate Luds, Inday Badiday's popular name to showbiz friends, her daughter Dolly Anne continued what she started. Aside from her regular entertainment column in a major broadsheet, the younger Carvajal also shares showbiz information to the public by hosting TV5's weekly talk show Paparazzi with Cristy Fermin and Ruffa Gutierrez.

Although his roots are in showbiz, IC never thought that he would be relating showbiz news and intrigues to televiewers.

When he came back in 2006, IC got interested in a different field of show business, which was hosting. Initially, he was just a guest co-host of Alex Gonzaga on Juicy! And then he became a regular host of this daily show, which is aired every morning and replayed for the late night programming.

AVOID BEING TOO CONFIDENT. Even though it was unplanned, IC was confident that he could fare well in this game of hosting a showbiz-related program.

To keep his career in hosting a talk show, IC always keeps in mind the lesson he got from his mother, which originally came from his grandmother: