Singer Selina Sevilla all set to marry another woman 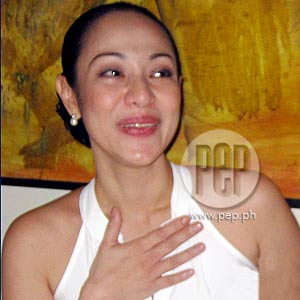 The relationship of Selina Sevilla and Lalen Calayan may raise eyebrows in a country like the Philippines, but the two women say the only important thing for them is their unconditional love for each other.

Selina Sevilla came into the news inJuly of 2009, when she showed on national television her injured buttocks from a failed 1998 butt-augmentation procedure by an unlicensed surgeon.

The singer, known for her sexy songs such as "Nilunok Ko Ang Lahat", "Ibaon Mo", and "Aray Naku" was literally feeling the pain in her behind because of the failed operation.

The silicon oil gel injected into her butt had disastrous effects on the former sultry singerover a 10-year period, but it was only in 2009 that she submitted herself to another surgical procedure to undo the damage to her butt.

Dr. Manny Calayan, celebrity cosmetic surgeon, headed the team that performed the second operation on Selina (real name Sharon Simon) on August 14, 2009. Since then, the singer seems to have recovered from her emotional and physical wounds (CLICK HERE to read related story).

Selina, by the way, is the first benefactor of the Calayan Surgicenter Foundation. The charitable organization aims to provide reconstructive surgery to those in dire need but can't afford it.

UNCONDITIONAL LOVE. Now, Selena says everything is going well for her, most especially because she has found love and understanding in Lalen Calayan, a niece of Manny Calayan.

Lalen said she became a friend to Selina, and was there during the singer's lowest moments.

The couple are set to wed this December or February the next year aboard the Calayan yacht. Lalen explained the process by which she and Selina would get married.

The move of Selina and Lalen certainly raises eyebrows in a country like the Philippines, which is predominantly Catholic (marriage is limited to men and women) and openly conservative (the Catholic church does not even allow women priests), but for the couple, their love is paramount.