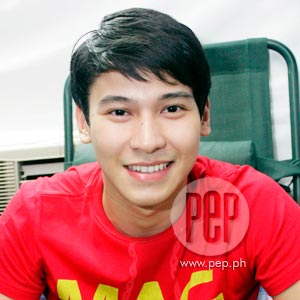 "Wala kaming life behind work," Enchong Dee jested when asked how she and Erich Gonzales find time for themselves with their busy showbiz schedules.

Enchong Dee happily related to PEP (Philippine Entertainment Portal) that the dispute between him and a victim of a vehicular accident he recently got into has been resolved.

PEP was able to interview Enchong on the set of his latest film, I Do, in Cubao, Quezon City, last night, September 7.

However, the Kapamilya star refused to give details about the settlement, but he assured that there's nothing to worry about anymore.

"Kung tutuusin," he continued, "wala naman talagang problema and there's nothing to worry about kasi everything is being handled very, very well."

He acknowledged the efforts of Mr. Manahan to clear things up.

But according to a source close to Enchong, aside from the financial assistance, the young actor also helped in the hospitalization and medication of the victim.

LAUNCHING MOVIE. Enchong is also grateful for having another movie project with Star Cinema, ABS-CBN's film arm, right after the family-oriented movie Sa 'Yo Lamang.

Enchong and screen partner Erich Gonzales will finally have their launching movie titled I Do, which is scheduled to be shown on September 29.

Since this is his first time to be a lead actor in a movie, Enchong admitted that it is a bit scary especially when he thinks about the reaction of the viewers.

"Kinakabahan kami [ni Erich] kung ano 'yong magiging resulta," he said. "But the fact that Star Cinema gave us the opportunity to make a movie on our own, kailangan naming gampanan ang responsibilidad na 'yon. Kumbaga, this is our test, our gift to all the supporters since we started Katorse last year."

Enchong also said that this movie is a break from his usual heavy drama roles, like in Magkaribal and Sa 'Yo Lamang.

Enchong added that he's having fun on the set with his co-stars, like comedians Pokwang, Melai Cantiveros, and Dennis Padilla.

After this movie, Enchong hopes that their fans will continue to support him and Erich in their future projects.