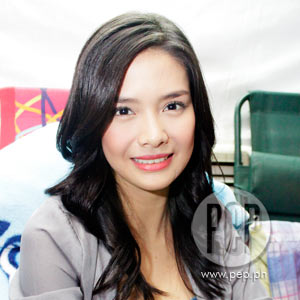 Erich Gonzales does not deny that she has been missing school lately because of work. Aside from the ABS-CBN primetime series Magkaribal, the young actress is also busy shooting two movies for Star Cinema: the romantic comedy I Do with Enchong Dee and the horror film Corazon with Derek Ramsay.

Erich said that she is just grateful for all the blessings coming her way, especially I Do, which is her first mainstream movie.

COCO MARTIN. Since she's preoccupied with tapings and shootings, Erich could care less about Coco Martin denying that he's wooing her.

STRONGER TEAM-UP WITH ENCHONG. On the other hand, Erich is happy that her team up with Enchong Dee, which started on Katorse last year, is getting more support from avid fans.

Enchong, who was seated beside Erich during our interview, agreed, "Kasi, it's an accident team-up. We just see each other in ABS-CBN, but we never thought that there's a chemistry behind that friendship. Sabi ko nga, kahit gumagawa kami ng eksena, hindi inaaral masyado. Kapag ginawa na namin, dahil sa sobrang kumportable, it appears good. I'm happy because siya ang kasama ko."

Although both admit that they've become closer to each other, this doesn't mean that the romantic relationship onscreen already becomes real.

Following Katorse, Enchong and Erich continued to work as partners in ABS-CBN's defunct TV series Tanging Yaman. Now, they're portraying the characters of Caloy and Chloe, respectively, in the fashion TV series Magkaribal.

Star Cinema's I Do will be their launching movie as screen partners. Their first movie as a love team was Cinema One's indie film Paano Ko Sasabihin in 2009.