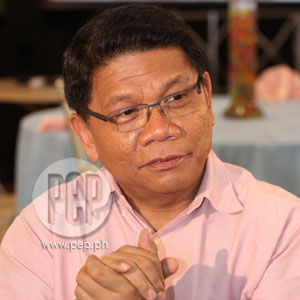 Asked how Mike Enriquez grew up with Imbestigador, he said, "I've grown old. You grew up more fulfilled, because you see the fruit of your work, e. Not because people come back and say thank you, but because people say, 'Ayusin mo 'yan, pai-Imbestigador kita.' That is enough fulfillment. That's all the thanks we need."

GMA-7's Imbestigador is 10 years old, and its host Mike Enriquez is proud of the program's accomplishments.

PEP (Philippine Entertainment Portal) had a chance to talk to the GMA-7 news anchor yesterday, September 8, during the press conference for Imbestigador's 10th anniversary at GMA-7's executive lounge.

Enriquez said the award-winning investigative show continues to exist because they never run out of people who ask for help.

"These people come to us with stories, instead of going to the police, or the courts, because they believe that when they go to Imbestigador in GMA-7, they will be listened to, they will be helped with no hint whatsoever man lang of being asked for any return," Enriquez explained.

Paradoxically, Enriquez said his own vision for the show is for it not to continue. He pointed out that the end of Imbestigador wouldmean the Filipino public has regained its full trust towards public institutions, like the police and the courts.

"My vision is for Imbestigador to be useless. To be needless. Di ba? That's more a dream right now than a vision," he said.

DANGERS OF THE JOB. The news anchor pointed out, however, that being the face for Imbestigador is not an easy position. Libel suits are aplenty, he said.

Several stories that they feature are also life-threatening.

"That's part of the job," he said. "If you were to put that in the graph, parang kuwan 'yon, may time na tumataas, bumababa. But ito ang sabi sa akin ng isang former general whom I ran to on the very very first death threat that I received. I ran to him, I went to his office and I said, 'General! Naka-receive ako ng death threat.' Sabi niya, 'Huwag kang matakot. Hindi ka aanuhin nun. Matakot ka dun sa mga hindi nagte-threat. Dun sa mga hindi kumikibo.'

PROTECTION. Thankfully, GMA-7 has stipulated in Mike Enriquez's contract with the network that he should be provided bodyguards. His household and family are also being watched.

Enriquez told the press about an instance of a security threat to him and his wife Lizabeth.

Fortunately, Enriquez and his wife don't have kids to worry about. "But my wife is crying," he added. "Sabi niya, 'Ano ba namang buhay na ito?' We had to stay in the hotel until the alert was neutralized."

The team that researches Imbestigador's stories, Mike said, is protected by staying anonymous as much as possible.

FUTURE FOR THE SHOW. Enriquez hopes Imbestigador will run for as long as people need help. It is not important, he said, whether he stays as its host or not.

"This is the first decade of Imbestigador. I think it should go on as long as there are people who need help. Now, whoever hosts the program, to me personally, being the current host and pioneer host, is not as important as what the program can do for those who need help," he said.

He can even recommend a replacement host now, if asked by the management.

"There may be another host, there may be another face of Imbestigador in the future, that's fine with me. As a matter of fact, if I am asked by the management, meron ka bang nakikita sa current crop ng News and Public Affairs na puwedeng susunod na [host ng] Imbestigador, I can give them a short list immediately," he said.