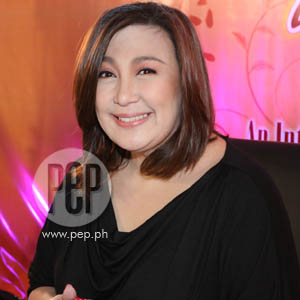 "What used to be so easy to do physically is not so easy anymore. Dati kahit tatlong gabing walang tulog, okay lang, e. Ngayon, parang your priorities change talaga as you grow older," says Sharon Cuneta about occasional thoughts of retirement.

After more than 30 years in the show-business industry, the Megastar remains unstoppable.

Sharon, her long-running Sunday talk show on ABS-CBN, may have ended recently, but the Kapamilya network is giving her three new shows—a singing tilt, a popular reality franchise, and a lifestyle show.

She announced this at a press conference hosted by ABS-CBN at the ELJ Building, September 9, to launch the shows.

The good thing about the offer is that Sharon Cuneta, 44, believes it's part of a "higher calling."

"Because Sharon naman was doing well. It's just that, parang, you know, you have to go with the times. I was also in need of a change," the Megastar said during the media launch of her new shows, held yesterday, September 9, at the 14th floor of ABS-CBN.

The three new shows are Star Power, The Biggest Loser Pinoy Edition, both on ABS-CBN, and Sharon at Home, on Lifestyle Network. In all these shows, Sharon's sharing and giving back to others is a factor.

In Star Power, Sharon plays mentor to an aspiring crop of young female singers. In The Biggest Loser Pinoy Edition, she's the host who inspires fat contestants to lose weight. In Sharon at Home, Sharon shares her life with her audience.

"Parang there's something that goes beyond...now it's no longer about earning a regular paycheck... I want, at the end of my life, I'll be able to say na, well, you did a lot for others in your very short time on this earth. It's so much easier to do good things for other people, than to be selfish," she said.

The press asked Sharon if she knew that another show is reportedly starting on the same date.

After being told that the show may be Willie Revillame's new game show on TV5, which may go head- to-head with her own Star Power, Sharon commented good-naturedly, "Ay, talaga naman. Talagang hindi ko alam 'yan."

ON HER WEIGHT. Sharon admitted that she has been hurt by criticisms of her weight. But she added that she is the first to laugh at herself.

The press found this witty and laughed.

But Sharon said she is on her way to losing weight. Her new show The Biggest Loser Pinoy Edition is very timely, and she felt that she was the perfect host for it.

Here the press had a good laugh again.