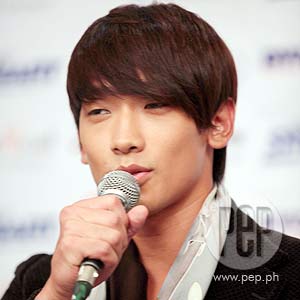 Korean pop superstar Rain—whose real name is Jung Ji-Hoon—will be performing tonight, September 11, in front of his Filipino and Philippine-based Korean fans at the SM Mall of Asia Concert Grounds in Pasay City.

The one-night concert dubbed Intensity will be the highlight of Rain's extended Manila stay, which saw the 28-year-old singer-actor shuttling from Cebu to various locations in Metro Manila to shoot scenes for his upcoming Korean action-drama series titled The Fugitive.

Local television network TV5 will reportedly air the program here in the country under the title Runaway.

In the series, Rain will be portraying a private investigator named Ji Woo. The cast and crew of the show travelled to Seoul, Japan, Macau, Hong Kong and the Philippines to film various scenes, making the program one of the most ambitious series in Korean television.

The group reportedly went to Cebu first last September 1, before heading to shoot in Greenhills, San Juan; Cubao in Quezon City; and selected spots along Roxas Boulevard in the busy district of Manila.

With the help of an interpreter, Rain told the press last Thursday, September 9, in the Champagne Room of the Manila Hotel, that portraying a spy investigator was certainly a big challenge, considering the magnitude of the project.

Rain's credentials as an actor include the well-loved Korean hit series Full House, as well as the Hollywood films Speed Racer (2008) and Ninja Assassin (2009), where he assumed the lead role of Raizo.

K-POP MANILA EVENT. For his concert tonight, Rain will be joined by the Korean group U-Kiss, along with Filipino balladeer Christian Bautista.

It's interesting to note that Christian—who is himself popular in some neighboring Asian countries, particularly Indonesia—also collaborated recently with other Korean artists collectively called One Way.

Rain's popularity outside his home country makes him arguably the biggest export of the Korean pop music industry.

The young singer-actor found himself at the center of the Korean Pop—popularly referred to by fans and the media as K-Pop—phenomenon that swept across Asia, including the Philippines, starting the early part of the new millennium.

Time magazine included Rain in its 2006 "100 Most Influential People Who Shape Our World" list. In 2007, the Korean superstar was listed by People magazine as one of the "Most Beautiful People" in the world.

Rain has also branched out to other fields like modeling, business, and designing.

During the Manila presscon, Rain described his long stay as "comfortable," and rated the food as "decent." He also thanked his Filipino fans and the people for their genuine hospitality.

"This is my first show ever in the Philippines, so you can expect anything," Rain said about his concert tonight.