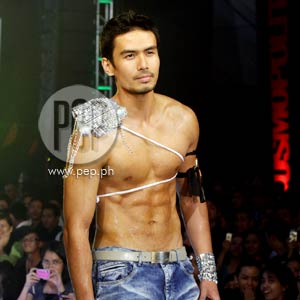 "Singing is still my art, pero acting is a way to express my melody, may song pero walang music," says Christian Bautista about the difference of acting and singing for him.

The show premiered yesterday, September 12, after ASAP XV. The theme of the story revolves around fate, letting go, and falling in love again.

Carmen plays the role of a Malaysian girl whose boyfriend died. The heart of her boyfriend was donated to a Filipino with a heart ailment, played by Christian. Then, fate started to play its part.

Most of the scenes were shot in Malaysia.

Christian and Carmen had worked together before for one of his music videos. Carmen played the girl Christian was deeply-smitten with, in the music video of "Afraid for Love to Fade."

BACK TO ACTING. Christian's acting career took a back seat for almost three years when he decided to concentrate on his singing career.

He had his first debut film as a cast member of Mano 5: Gua Ai Di. He was also part of the defunct ABS-CBN teleserye Kamapanerang Kuba.

Does this mean he will be concentrating more on his acting career?

"Singing is still my art, pero acting is a way to express my melody. May song, pero walang music," Christian said.

"Nagulat ako. I'm honored. I'd like to thank Cosmo for this event," Christian said. when asked about his reaction when he was told he would be included in the exclusive list.

He then enumerated his preparation for close to a month before the show: "tamang diet, tamang workout and tamang concentration."

When he finally got on the ramp, was he nervous? "Hindi naman, parang relieved lang, parang wooh! Fun!"

Is this the start of a change of image for him?